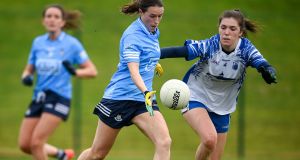 Sinead Aherne of Dublin in action against Róisín Dunphy of Waterford during the TG4 All-Ireland Senior Ladies Football Championship Round 2 match between Dublin and Waterford at Baltinglass GAA Club in Baltinglass, Wicklow. Photo: Stephen McCarthy/Sportsfile

Saoirse Noonan’s second minute goal was crucial as Cork took charge of Group 1 of the TG4 All-Ireland Senior Championship with a slender victory over neighbours Kerry.

Victory over Cavan in Birr next Sunday will guarantee Ephie Fitzgerald’s side a spot in the last four, but they were made to fight all the way for this win, as 10 points from Louise Ní Mhuircheartaigh almost carried Kerry into the knockout stages.

Playing against the wind in the first-half at Austin Stack Park in Tralee, Cork got off to the perfect start. After 30 seconds Ciara O’Sullivan kicked their opening point from the right, and in the second minute Áine Terry O’Sullivan laid on the pass for Noonan and the Nemo Rangers player hit the net.

Noonan had a second great goal chance in the fifth minute, but she chipped over the bar to give her side a 1-2 to 0-0 lead.

It was a fierce start from the Rebels, but Kerry soon found their groove. It all started with an excellent effort from the right, which captain Anna Galvin curled over, while a Síofra O’Shea point on the run further settled Kerry.

From there Ní Mhuircheartaigh took charge of the action. A free and a point from play got her on the board, before she curled over a second free from the left to level matters in the 16th minute.

Cork managed to wrestle clear as Doireann O’Sullivan scored from distance following Ciara O’Sullivan’s good work, but both sides also left goal chances behind them. Andrea Murphy hit the side net for Kerry, and 60 seconds later Orlagh Farmer saw her shot crash off the crossbar at the other end.

A couple of frees from Ní Mhuircheartaigh were matched by Orla Finn before half-time, and although Martina O’Brien denied Murphy a goal, her shot went over the bar via the crossbar and Kerry led by 0-9 to 1-5 at the interval.

Sensing defeat Kerry rallied again and Ní Mhuircheartaigh landed two frees, and after Doireann O’Sullivan put three between the sides again, Hannah O’Donoghue was hauled back by Ciara O’Sullivan as she sought to get the breakaway equalising goal.

Ní Mhuircheartaigh’s free cut the gap to two with time ticking away, but there was still time for Noonan to cap a fine display with an excellent score at the death.

Champions Dublin became the first side to book their place in this year’s TG4 All-Ireland Senior Championship semi-final, but only after a ferocious Group 3 battle with Waterford at Baltinglass.

Captain Sinéad Aherne kicked 0-6 for Mick Bohan’s side, who opened their campaign with a three-point triumph over Donegal last weekend. Their Munster counterparts provided a stubborn resistance and when Róisín Tobin shook the net on 44 minutes, just a single point separated the teams.

However, Dublin showed all of their big-game experience to get themselves over the line and put both Waterford and Donegal out of the running for top position in the group.

Dublin initially set out their stall with points from attackers Aherne and Caoimhe O’Connor, before Fennell split the posts at the opposite end. Tobin cancelled out another Aherne score to keep Ciarán Curran’s charges in touch, but the holders proceeded to dominate the remainder of the first-quarter.

Sarah McCaffrey, Carla Rowe, O’Connor and Niamh McEvoy rattled off four points in as many minutes to give Dublin a 0-7 to 0-2 cushion at the first half water break. The Metropolitan outfit subsequently increased their lead with Aherne’s third of the opening period, only for a resilient Waterford to storm back into contention.

Katie Murray, Fennell (two) and Aileen Wall all found the target to move the Déise women several steps closer to their high-flying opponents. Dublin lost Lauren Magee to a yellow card on 27 minutes and despite a fine contribution from Rowe, another superb score by the impressive Fennell meant their lead stood at 0-9 to 0-7 during the interval.

The Dublin defence held firm under increased pressure on the resumption and wing-back Orlagh Nolan roamed forward to edge them further in front in the 38th-minute.

They looked set to push on when Rowe and Davey raised white flags in quick succession, only for Waterford to once again display their mettle. After running straight down the heart of the Sky Blues defence, Wall released the advancing Tobin for an unstoppable strike beyond the reach of Ciara Trant.

Dublin suffered a further set-back when key defender Martha Byrne was sin-binned on 49 minutes. But instead of being reined in, Dublin moved three in front courtesy of a two-point salvo by 2018 Footballer of the Year Aherne.

Waterford persevered in the closing moments and Fennell’s seventh point of the tie offered them a fighting chance. Yet with substitute Lucy Collins and Aherne hitting the mark either side of this score, Dublin had done enough to secure a last-four spot.

Sarah Rowe was in unstoppable form as Mayo dished out a heavy beating to Tyrone and moved within one win of a spot in the TG4 All-Ireland Senior Championship semi-final.

Rowe scored 2-9 for her side in an impressive display, while Tamara O’Connor and substitute Deirdre Doherty also found the net for Peter Leahy’s dominant side.

The loss means Tyrone are out of the championship, while Mayo and Armagh will face off next Saturday, with the winners earning a spot in the last four.

In their first outing since March, Mayo dominated from the start and after kicking a wide from the first attack, they turned over Laura Kane’s kickout and O’Connor hit the net with a good, low finish. Just 23 seconds had elapsed.

While Mayo were dominant, their accuracy in front of goal left a lot to be desired. No one was immune as shots dropped short and sailed wide for much of the first half. Following that inefficiency, Tyrone got on the board when Emma Brennan gathered a loose clearance and pointed, but that eighth minute score was their only one in the first half.

A free from Rowe stretched Mayo’s lead before she pointed from play, and just after the water break, Mayo powered ahead when Aileen Gilroy, Rachel Kearns and Sinead Cafferky all combined to send Rowe in for a quality goal.

In the closing minutes of the half Mayo pulled even further ahead with a couple of Grace Kelly scores catching the eye. They were 2-5 to 0-1 ahead but they should have been much more in the ascendancy.

While they may have been wasteful in the first half, Mayo were ruthless in the second. Rowe had added four more points by the 36th minute, while Fiona Doherty also tagged on a score, which put them 2-10 to 0-1 clear, before Grainne Rafferty finally ended 29 scoreless minutes for Tyrone with a free.

Deirdre Doherty replaced Kearns early in the second half and made a real impact, and after Rowe scored her second goal six minutes from time, Doherty rattled Mayo’s fourth direct from a free two minutes later.

It was a routine win for Mayo with Grace Kelly and Rowe adding further points, but next week they will have to improve to deny an in-form Armagh.