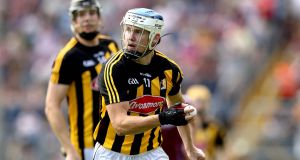 Kilkenny’s TJ Reid will look to claim scores from distance against Dublin on Saturday. Photograph: Inpho

Leinster SHC round one

For all of the excitement around the place about how Kilkenny’s injury problems have now given Dublin a real shot at beating them in Nowlan Park, the bookies are resolutely unimpressed. The caveats are obvious. For starters, Mattie Kenny doesn’t have a clean bill of health either and the loss of returned prodigal Mark Schutte deprives him of a hoped-for inside attacking threat.

As things stand, Danny Sutcliffe doesn’t look to have a whole pile of support in the visiting attack with two of last year’s stand-out performers in this fixture Conal Keaney and Liam Rushe only coming back into action at this stage.

Dublin’s defence has been their strong suit during a decent league campaign and the main conundrum appears to be whether to play Seán Moran at centre back or sweeper.

Brian Cody’s difficulties are considerable. Five of the back nine who started this time last year in Parnell Park are out.

Eoin Murphy is probably their most valuable player, keeping goals out at one end and lancing over long-range frees at the other – like the four he shot over against Dublin 12 months ago.

Dublin will execute the familiar game plan of trying to make the middle third as attritional and congested as possible but Kilkenny will be happy enough with that.

The scoring difficulties in the league will be considerably eased by the return of Ballyhale players, principally TJ Reid who will happily shoot from farther out without necessarily trying to break through the cordon. This remains a tall order for the visitors.

Leinster SHC round one

It’s hard to overestimate the value of this to a county like Carlow, which has done all of the right things in recent seasons, incrementally building their presence, winning both Ring and McDonagh Cups, at the elite level of both championship and league. This is the pay-off, a visit from the provincial champions and All-Ireland winners of two years ago.

Colm Bonner’s team rattled Galway in the league, holding them to a draw and there is the general encouragement of Joe Canning’s absence to raise confidence levels.

Galway were, as Bonner acknowledges, not at full tilt in the spring and although their chief provider is out, they have another three former All Star forwards at their disposal and by all accounts, have settled well both in training and for their clubs in recent weeks.

Joseph Cooney and Johnny Glynn are back and they can use the opportunity to get the show on the road.

Munster SHC round one

This most storied of match-ups hasn’t lost much in the transition to round-robin format. Last year’s volcanic tale of two halves in Thurles couldn’t produce a winner, interestingly given the eventual fate of both teams, and this is eagerly looked forward to as both the first championship meeting of the counties in the new stadium and a bellwether for the rest of the summer.

Little attention will be paid to the league rout inflicted on the home team by Tipp but it was a reminder that Liam Sheedy’s side are capable of cutting loose from time to time.

Cork’s problems last year included a lack of depth and those anxieties haven’t been entirely assuaged. News of Alan Cadogan’s injury deprives John Meyler of one obvious improvement on 12 months ago.

There isn’t expected to be much in this. Tipperary’s experience and firepower are acknowledged but the line-up needs to be freshened if long-term prospects are to materialise.

Their lack of outright pace has been frequently mentioned but they will also need the old cutting edge up front, evident in the Páirc Uí Rinn league fixture but not so much over the campaign.

Cork have a couple advantages. They are younger, quicker and have their own roster of decent forwards, even with sparse back-up. Patrick Horgan’s accuracy was a constant even in a disappointing campaign whereas Tipp struggled to sort out their free taking.

No-one is going to be surprised if Tipp launch a third successful raid on the venue in 12 years but Cork look slightly more likely.

Another fixture, which invites us to discard league precedent. Waterford gave Clare a walloping in the quarter-final to take home from their reconnaissance mission to Walsh Park.

For the home side, a first big championship match in 23 years is eagerly awaited even if the lack of interest from the other side of the province – more than 1,000 tickets were returned – may leave the attendance short of the hoped-for capacity.

On the field, Waterford are buoyant after a league that took them to Croke Park for the final – even if that ended disappointingly – and with players coming back, Páraic Fanning has a good hand to play although the departed Tom Devine and Jake Dillon will be sorely missed in an attack, thin enough on resources.

Conor Prunty’s long-awaited call-up at full back will be hoped to compensate for inexperience with a physical aptitude to take on John Conlon whereas go-to man marker Conor Gleeson is expected to keep tabs on Tony Kelly whenever he drops back.

Clare’s defensive frailties aren’t improved by the loss of Jamie Shanahan and the suspended Conor Cleary and they desperately need to smarten up their discipline, having facilitated Stephen Bennett and Cork’s Patrick Horgan accumulate enormous totals in the league – 0-14 and 0-15, respectively, from frees.

Waterford threatened in Ennis last year before injury misfortune cost them four defenders by the 46th minute and now they have home advantage and a bit of momentum built up. Clare anxieties tell their own story.