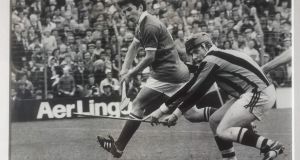 Tadhg Coakley in action for Cork against Kilkenny in the 1979 All-Ireland minor hurling final. 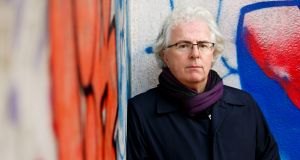 Tadhg Coakley: “The novel is about the lives they lead beyond or behind the match and the challenges they face – the match isn’t the most important thing.”

Former Cork All-Ireland minor medal winner and first time novelist, Tadhg Coakley is in relaxed form as he- discusses his recently published The First Sunday in September which uses the thread of Cork reaching and winning an All-Ireland hurling final to tell a multiplicity of individual stories

A team-mate of future Cork senior stars, Ger Cunningham, Kevin Hennessy and Tony O’Sullivan when Cork defeated Kilkenny in the 1979 Minor All-Ireland, Coakley later won four Fitzgibbon Cups with UCC where his team-mates included Tipp’s Nicky English who referenced him in his 1996 autobiography.

Discussing the shrewdness of then UCC coach and subsequent Cork coach, Fr Michael O’Brien, English recalled how the cleric saw something in Coakley that perhaps the future writer may not have been aware of, in the process, paying something of a back-handed compliment to Coakley.

“I remember our first Fitzgibbon final, he [Fr O’Brien] put in Tadhg Coakley to do a marking job on Tipperary senior player (and future Tipperary manager), Eamon O’Shea – now O’Shea was a star at the time, having played in the National League final of 1979,” writes English in Beyond The Tunnel.

“Even though Tadhg was on the Cork minor team of ’79, not many of us would have fancied his chances against O’Shea. Tadhg was ‘a boot boy’ from Mallow, a skinhead with a donkey jacket who adopted a very nonchalant attitude to life,” continued The Irish Times analyst.

“To all of us, he was one of the nicest fellows in the panel and a well respected corner-forward but hardly the man to wear down an inter-county star at wing-back. Anyway, Fr O’Brien picked Tadhg at wing back and he never gave O’Shea a puck of the ball.”

Nearly four decades later, Coakley has forsaken the donkey jacket and skinhead haircut as well as the nonchalant attitude to life to craft a novel which puts hurling at its core and uses it as a prism to explore diverse subjects such as love, adoption, suicide, alcoholism and early onset dementia.

“I had a lot of discussion with my editor at Mercer about the title, The First Sunday in September because it’s synonymous with the All-Ireland hurling final though obviously it moved forward this year to August but we decided to retain the name, precisely because of that synonymity.

“But even though the story revolves around a fictional All-Ireland final between Cork and Clare, hurling doesn’t feature in the sense that it isn’t an account of the game – there are 19 different characters with their own stories and hurling is only described in two of the 19 stories.”

The impetus for the novel came when Coakley retired as a librarian at Cork Institute of Technology and enrolled for an MA in Creative Writing in UCC where he had to submit a story to a workshop and he found himself writing about the run-up to a hurling All-Ireland.

“The stories revolve around the day of the match but the game itself is only described in two of the 19 stories each built around a different character and one of those is Dúchas which is the first story I wrote and it gave me the character of Tim Collins who gives his son up for adoption as a baby.

“I had no intention of writing a book at this stage – I just wanted to write a story from the point of view of a birth father watching his son playing in an All-Ireland final and seeing him being embraced after the game by his adoptive father and the birth father not being able to share in that.

“But once I had my character Tim Collins, I knew that he would reappear and there are also stories from the point of view of his wife, Evelyn and Sean Culloty, their birth son who captains Cork so I knew there would be more stories where some of the same characters would reappear.”

Coakley was to spend some nine months writing a first draft of the novel and when he realised that he had characters that were appearing and reappearing, he started to look at stitching the stories together, sometimes changing their endings so that they would lead one into another.

The novel opens with Sean Culloty and the Cork coach, Dinny Young, visiting an old hurler, Bill Barrett in a nursing home some two weeks before the All-Ireland and concludes with a story set 15 years after the final, featuring a Clare woman in her 20s who was taken to the game as an eight-year-old.

Reworking the original draft over the next 15 months or so, Coakley has created a novel that uses sport as a portal into the lives of characters whose emotional struggles are explored and examined with a raw realism and a searing lack of sentimentality.

But back to Cork winning the All-Ireland – what prompted Coakley to leave himself open to a charge of being a Cork sentimentalist, if not fantasist, given it is 13 years since the Leesiders won an All-Ireland title and a dispiriting record of just one victory in seven semi-final outings since 2006?

“It all goes back to Dúchas and seeing how a man would deal with not being able to embrace the son he gave up for adoption on a hugely emotional occasion when he captains Cork so Cork had to win and once that happened and I was happy with the way it turned out, I couldn’t go changing it.

“So, yes, Cork do win but in the majority of the stories, it doesn’t matter in a way who wins – the novel is about the lives they lead beyond or behind the match and the challenges they face – the match isn’t the most important thing even though it provides a thread, tying their stories together.”