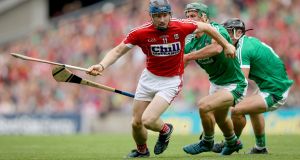 Cork’s Conor Lehane is put under pressure by Seán Finn and Darragh O’Donovan of Limerick during the All-Ireland semi-final at Croke Park. Photograph: Inpho

Condensing the championship has had minimal impact on club fixtures, according to Cork hurler Conor Lehane, whose Midleton team is one of the first clubs into provincial action in Munster in Sunday’s quarter-final against Ballygunner.

“It hasn’t changed that much,” says Lehane, “we still had our first club game at the end of April, or something like that, and lads who mightn’t be invited in have a nearly four-month gap, as we didn’t play until September.

“That’s because Cork went a bit further but that’s a new season and a new year and it’s very unfair. But it’s a hard to try and figure it out.”

Midleton in fact lost the Cork final to east Cork divisional side Imokily earlier this month, but progressed nonetheless as club representatives: Lehane still prefers the condensed championship, particularly the round-robin phase in Munster, even if the club campaign remains the same.

“Nah more games definitely, and the games were a lot better this year. And less training. I noticed we ended up training way more than we played games (before), and it’s nearly more draining, If you lose it’s back training again, and four or five more sessions until the next game. You’d end up three or four championships games for 70, 80 training sessions.”

Still Lehane rejects the suggestion the added games may have ultimately cost Cork, as they appeared to run out of legs in the All-Ireland semi-final loss to Limerick, in extra-time: “Looking at the result, and the way it went, you might say we got ‘gassed’. But looking at it again, for Limerick too, one could have won or lost by way more, just decisions made by the ref, or mistakes by each team.

“Misses we had in the first half, easy chances, even Nicky (Quaid’s) save, an unbelievable save, that could have been a goal and no one would have talked about legs yet. If you prepare well in advance, it’s not about legs.”