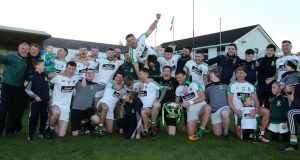 Moorefield raced out of the traps and scored two goals inside the first quarter, a fourth minute effort by Eddie Heavey, before another by Mark McDermott in the 15th minute. Athy goalkeeper Stephen Davis was shown a red card in the aftermath of McDermott’s goal for lashing out at Niall Hurley-Lynch and they were left with a huge uphill battle from then.

Athy had no choice but to throw everything forward in the closing stages and were given some hope when a long ball by Niall Kelly was fisted into the net by Kevin Feely.

Feely then won, and scored, a 55th minute penalty to cut the lead to four points.

There were some nervous moments in injury time as Athy continued to bombard the Moorefield square with high balls but with Daryl Flynn moved back to look after Feely.

Moorefield will now look to defend their Leinster title as successfully as their Kildare one.