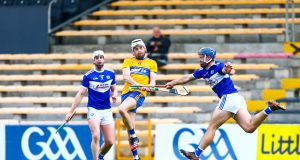 The reaction of the respective managers told a tale about the real winners and losers from this All-Ireland SHC Round 1 qualifier.

Brian Lohan, crestfallen after watching his Clare team toss away a seven-point lead and limp to victory, could barely utter a few words through gritted teeth afterwards.

Eddie Brennan on the other hand, despite maintaining this was a game his underdogs should have won, acknowledged there was some victory to be taken from the narrowest of losses against a hurling superpower.

Seven years ago, Clare were All-Ireland champions. Right about now you wouldn’t put the mortgage on them to last beyond next weekend’s Round 2 qualifier games.

Admittedly, they were missing Peter Duggan, Colm Galvin, Podge Collins and John Conlon for various reasons, and David McInerney was sent off late in the first-half, but Lohan will still have expected better.

Leading by seven points in the 56th minute, they were outscored 1-6 to 0-3 from there by the 2019 McDonagh Cup champions and were mightily relieved to hear referee Thomas Walsh’s whistle for full-time.

Aaron Dunphy’s 68th minute Laois goal left just three in it and further points from Pádraig Delaney – who had a terrific head to head with Tony Kelly – Pádraig Purcell and Mark Kavanagh pushed Clare all the way.

Kelly, who struck 0-17 in the Munster championship loss to Limerick, scored 0-13 while defender Rory Hayes was the gamebreaker with the long range 69th minute point that separated the teams. Still, more a moral victory for Laois than a performance for Clare to shout about.

“We conceded three goals and any time you concede three goals against opposition like that you are going to be under pressure,” said Lohan, whose team led 0-16 to 1-6 at half-time.

As for Brennan, he felt Laois let a huge opportunity to qualify for the last eight slip away.

“I think we did enough to get something out of that match and I’m bitterly disappointed,” said Brennan.