Keith Duggan: Tyrone in need of Mickey Harte more than ever 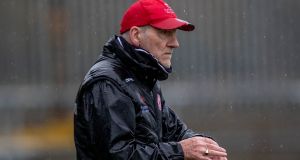 Tyrone manager Mickey Harte is ‘one of the most influential managers Gaelic games has seen’. File photograph: Inpho

Sometime after half-past-three last Sunday afternoon, Mickey Harte sat staring out from a bleak, darkening stand on to an empty torn up football field as he reflected on Tyrone’s sudden exit from the All-Ireland championship and the inevitable question of whether he would remain on as manager after his 18th season.

Tyrone’s lunchtime encounter with Donegal had been a granite hour of sport, riveting to witness because the grim intent of what happened on the field contrasted with the nothingness all around. You could hear the collisions of the bodies despite the rain beating on the metal roof of the dark stand.

Given where Harte has travelled within the game – the sun-drenched colour saturated images of a sea of ecstatic Tyrone people after their invincible days of 2003 and 2005 and 2008 – there was something fabulously lonely about where he now found himself. But for a few tiny differences – missed shots, a ball cleared off the goal line, a slip here and there – Sunday could have been one of Harte’s finest hours. Instead, the season was over.

Sport dishes out mercilessness, glory and sentimentality in random dollops. When a manager becomes a figurehead of a team, as Alex Ferguson was with Manchester United or Kevin Heffernan was with Dublin or Brian Cody remains with Kilkenny, there is, rightly or wrongly, an intense focus on whether they will be back.

So the Tyrone squad had hardly made it back to their homes before Harte’s future came up for discussion on RTÉ’s The Sunday Game. Tyrone’s Seán Cavanagh, one of the games greatest ever players and someone who has had a complicated relationship with Harte, was a pundit that evening. Cavanagh was in a desperately awkward position and remained diplomatic and fair as he grappled with what is best for the future generation of a football county in which the game radiates with an unusually intense social and cultural importance. In Tyrone, it truly is different.

Harte is clearly one of the more interesting people in Irish public life. He’s one of the few people who could rightly be described as radical in that he sticks to his beliefs and genuinely doesn’t care what the outside world thinks of him. He is upfront about his religious devotion and in post-Catholic Ireland it has become controversial to admit that you say your prayers. He and his family have coped with a horrendous tragedy. He’s a pioneer in a culture when abstaining from booze is also viewed with suspicion: an unwillingness to have the craic – unless you are abstaining for dependency reasons, which means you get a pass because you probably had too much craic at some stage or other.

His boycott of RTÉ has been well documented. He showed up at rallies in support of businessman Seán Quinn. His defence of Tyrone footballer Cathal McCarron, in the wake of his controversial biography, was typical in its indifference to the court of public opinion. And, of course, he practically sacrificed the primary years of his own football career over a point of principle in Errigal Ciarán.

All of this is background to the ever-present sight of Harte on the sideline, slender, bespectacled, contemplating the chaos of Ulster championship games as though figuring out a crossword puzzle.

But the stars of Cork and Down have dimmed considerably in that space of time. Donegal, while hugely successful in Ulster, have not appeared in a semi-final since 2014. In that same period of time, Tyrone have won four Ulster titles, played in five All-Ireland semi-finals, two All-Ireland quarter finals and met Dublin in the All-Ireland final of 2018. It’s arguable that the competition just to make it that far has never been tighter. Look at Monaghan, brilliantly managed by Malachy O’Rourke and on the threshold for a few magical summers but ultimately held to one semi-final appearance where Tyrone, their daemon, were waiting to beat them, by the usual point. Only twice did they exit early, in the qualifier rounds of 2012 and 2014.

That 2012 game is memorable because the defeat came to Kerry in Killarney on a gorgeous summer’s evening and it felt like the sun was setting on something. The delight of the Kerry cognoscenti was uninhibited: the mood was revelatory of just how deeply the hurts of ’03 and ’05 and ’08 lay. It didn’t matter that they had defeated the husk of the Tyrone All-Ireland team, just that they had won. Nothing signified the impact Harte has had on football like that day. Before Harte, Kerry was scarcely aware Tyrone existed.

Tyrone have had many fine footballers since 2008. But their All-Ireland winning teams were densely packed with footballers of rare and contrasting gifts revolving around the once in a lifetime genius of Peter Canavan. I’m not sure any manager could have done more with post-08 Tyrone than Harte has.

And it could be that with Conor McKenna, Cathal McShane and the emergence of Canavan the Younger, Tyrone are on the verge of assembling an attacking unit with the potency to win a fourth All-Ireland.

Maybe there is an impatience within the county for some other voice; for a new figurehead to bring the next generation forward. But equally, if Tyrone are close to being the real achieved thing, it may be a very risky time to lose the services of one of the most influential managers Gaelic games has seen. It leaves everyone, including Harte, with much to ponder over this long winter. And it’s the old saying: be careful what you wish for.