Brian Cody: to scapegoat Richie Hogan would be ‘outrageous’

'If it happened and was deserved then it happens. But the circumstances . . . ' 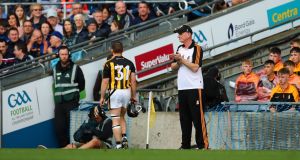 Brian Cody is sure Richie Hogan’s red card was the decisive moment in Sunday’s All-Ireland final, but warns that to blame him for the defeat would be “outrageous”.

The Kilkenny manager is not convinced that referee James Owens was certain of his decision, and the morning after his team’s 14 point defeat to Tipperary he insisted that a red card was not the right call.

“Am I happy about the incident? No,” Cody told reporters at Citywest Hotel on Monday morning. “Am I complaining about the result of the match? No. Tipperary are All-Ireland champions and fair play to them.

“Richie just . . . it’s very, very tough what happened to him. If it happened and it was deserved, then it happens. But the circumstances, it was very tough.

“Look, he’s fought injury after injury. He’s fought the odds massively. Lots of people wouldn’t have been able to do that or wouldn’t have had the heart or the stomach to do it. He had and has and he’s just an outstanding player.

“Certainly to scapegoat him would be outrageous . . . outrageous, you know, completely. He didn’t produce the red card.”

In the 33rd minute of Sunday’s hurling finale Owens showed Hogan a straight red card after his elbow connected with the head of Cathal Barrett. The 2014 Hurler of the Year was coming in at pace, attempting to shoulder the isolated Tipperary defender over the sideline, but was a millisecond too late with his connection.

Barrett had earlier left Hogan requiring treatment off the field, after a high tackle of his own which only resulted in a free.

Cody has yet to watch the footage of the match back but says he has been “reliably informed” of the incident.

“I’m not interested in having any discussion about anything to be honest because the game is now over but the game was certainly decided in the 33rd minute.

“I mean was it a dirty game? Was it a clean game? Was there bits and pieces of physicality in it as there should be? Was there a huge decision made coming up to half-time controversially? That’s the reality you know.

“I don’t want any message coming across from here that we’re complaining or whinging or anything like that. Do we believe it was a red card, no I don’t. But that’s just normal practice. I mean I was very close to it, for me, the referee didn’t know. In his expression, his body language, everything about him. He didn’t go over and say, ‘Richie’. He went over and consulted the linesman, he consulted the player that was down – why I don’t know. But that was it. That was the incident.

“All I’m saying is, that watching the referee and seeing what was going to happen, I was amazed when he decided to flash a red card.”

Despite being clearly disappointed by the defeat, and the nature of it, the 11-time All-Ireland winning manager was proud of his team’s performance. Back in their first final since 2016, this was only his fourth defeat in 17 All-Ireland deciders. So what was the feeling at the Kilkenny banquet following the loss?

“There was a real sense that the team had played really, really genuinely and honestly. The sending off impacted massively on the game, a game where we had been competing very, very well, really well. Down to 14 men, just before half-time, against a team like Tipperary . . . like, we weren’t expected to be able to cope with them 15 on 15. And we’re not at the stage where we can take on Tipperary with 14 players. But the team to me in the second half were outstanding, they kept at it and at it and at it. The scoreboard wasn’t pretty but such is life.”

After a strong start Kilkenny had led by five points, and even after Niall O’Meara’s opening goal there was only a point between the teams when Hogan was sent to the dugout.

“We were competing, obviously, they got a goal but that was going to happen too so things were just going ahead and if it had been 15 on 15, I’m not saying that we would have won the game, don’t get me wrong but I would say the game was set up for a real ding-dong battle. One team was going to come out on top eventually but we were competitive, very competitive, as were they of course. I’d say the red card sucked the life out of the game for everybody.”

Coming off the back of a Leinster final defeat to Wexford which signalled the county’s longest drought in the province since 1997, few backed Kilkenny to get past either Cork or reigning champions Limerick. Cody, though, was always confident in his team and their talents.

“I think we were 12/1 before the Cork match someone tells me. I don’t follow these things, but I’m told that which gives an indication of the public perception and even the professional perception of what our chances were meant to be.

“I never felt like that, I had a huge belief in the panel of players we have and their honesty and everything else about them. After yesterday, if anything that has even increased.

“I mean look, where is the team 33 or 34 minutes into the game in the All-Ireland final against an outstanding team? It was ding-dong, that’s where we are and that’s where we were yesterday. But are we good enough to take on Tipperary with 14 players? No, not a chance. They are too good, too skilful. They are top class and always have been.”

After his 21st season at the helm, Cody gave absolutely no indication that there would not be a 22nd. Reminded of his words in the same scenario three years ago, when he told reporters: “there are players on our panel who haven’t been seen yet who will be top players, and quickly. You can rest assured of that”. The Kilkenny manager added: “There’s still some more.”