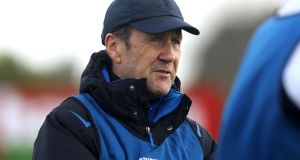 Jack O’Connor has been nominated to be the new Kildare manager. Photo: Lorraine O’Sullivan/Inpho

The Kildare county management have confirmed the nomination of former Kerry All-Ireland winning manager Jack O’Connor as their preferred candidate to succeed Cian O’Neill as their new senior football manager.

A statement from Kildare GAA said: “The Management Committee of Kildare GAA are pleased to nominate Jack O’Connor for the position of Kildare Senior Football Manager for a three year term. The proposal will go before the September County Board meeting for ratification.

“Jack’s proposed backroom team will be announced over the coming weeks. A press briefing will organised following the September County Board meeting.”

He also has a notable a connection with Kildare through a coaching involvement with Moorefield, the current county champions, while his sons, Cian and Eanna, have been involved with the Newbridge club for the last number of years.