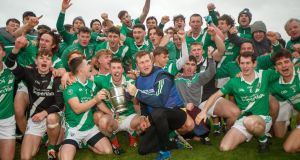 Moycullen are the Galway senior football club champions for the first time thanks to Dessie Conneely’s personal haul of 1-9 and Conor Bohan’s crucial 45th minute goal at Pearse Stadium.

With champions Corofin dethroned by Mountbellew/Moylough in the semi final, Val Daly’s side was expected to claim a first win since 1986, but instead a powerful second half display from Don Connellan’s outfit saw them kick on to victory in just their second final appearance.

A penalty from Eoin Finnerty in the 39th minute had cancelled out Conneely’s brilliant goal just after the break, but there was to be no denying the Gaeltacht side, who took a huge step towards victory when Bohan crashed the ball to the net 15 minutes from time.

Moycullen had the wind at their backs in the opening half, and Conneely kicked the victors into an early lead before Barry McHugh levelled matters. Conneely would go on to land another five points before the interval but his scores were often in reply to Mountbellew/Moylough who held a two point lead after a burst of scores from McHugh and Finnerty midway thought the half.

But Conneely and Antrim man Owen Gallagher landed the final two points of the half to level the scores at 0-7 each at the break.

Mountbellew/Moylough were quick out of the blocks after the restart, but Conneely’s goal three minutes into the second period was as decisive as it was brilliant. When Conneely added a free soon after they were 1-9 to 0-8 clear, but Finnerty’s penalty following a foul by Sean Kelly on Gary Sweeney had the game all square again.

But as the second water break approached, Gallagher’s run split the Mountbellew/Moylough defence and Bohan drilled a low shot to the net, which made sure of the historic win for Moycullen.