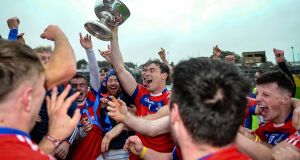 Two minutes remaining and Turloughmore goalkeeper Mark Fahy launches a puck-out onto the significant breeze travelling downfield over Kenny Park. Among the crowd gathering to contest it is Daithi Burke, leg heavily strapped and just back on the pitch having come off injured just before half time. If Turloughmore are to recapture old glory and deny St Thomas’ a third Galway senior title in a row, it is going to require the dramatic intervention of a goal.

And it would not come.

This was a collision of old Galway hurling royalty and St Thomas, the south county club who have come storming to prominence. Since winning their very first title in 2012, they have now won their fifth on an autumnal day which brought the competition to a close 72 days after it had started.

Through the afternoon this gripping contest was framed around a smartly taken early goal by Conor Cooney. He exploited a rare chink of light to find the net through a crowd, a score that even then felt as though it could be crucial as the small, passionate crowd settled in to the stand on a dark afternoon.

Cooney’s goal gave St Thomas’ a foothold and when the moment came, they responded to the danger of a perfectly timed race for the line from Turloughmore with the clear-headedness and doggedness of back-to-back champions. The contest revolved around a minute of hot controversy when a brilliant midfield strike by Sean Loftus was originally waved wide only for the referee, after consultation, to correctly award the score. A terrific Sean Linnane point gave Turloughmore the very first lead of the day with seven minutes remaining. Suddenly, the sky had cleared for them.

But St Thomas restored order with the last of Conor Cooney’s six struck frees. On their next possession, Eanna Burke flashed onto a dropping ball and somehow found the space to strike a point. And after they cleaned up another long-ball attack from Turloughmore, they worked the ball downfield for substitute Brendan Farrell to push them two clear.

“A phenomenal battle,” said manager Kevin Lally as the rain spat and the celebrations began.

“And we have been saying that quietly all week: that if it was a battle, we would win it. The heart, the spirit, the backbone in this group is phenomenal.”

It was a win formed in the stubbornness of their back division but up front, Oisin Flannery’s inventiveness and efficiency yielded three invaluable points.

Crucially, they also forced the challengers to score from play, conceding none of the free opportunities that allowed Conor Walsh three first half scores. Guided by Fintan Kelly, outstanding at fullback, and Shane Cooney in front of him they smothered the series of long, direct balls that Turloughmore delivered.

The challengers did very little wrong here, striking just two wides in a seriously industrious first half when they recovered from the shock of that early goal - Cooney had 1-1 to his name within the first five minutes. They were guided by a superbly composed display from former county star Fergal Moore, who had two vital scores from midfield when his club was still settling into the game.

That opening half was rivetingly end-to end as St Thomas’ rained ball down on Turloughmore, with Ronan Burke and Daniel Loftus prominent in their fire-fighting efforts.

It was a huge occasion for Turloughmore, back on prize-giving day for the first time since 1990 and having last won the championship in 1985. Tapping into that creates its own pressures but all the signs are that they will have further chances in the coming seasons. The loss of Daithi Burke can’t be understated and it was confirmed afterwards that he will go for scans this week for what was a fresh injury. And they will look at the eight second half wides as moments when decision-making cost them.

“We gave ourselves a foundation in the first half against the breeze but we were never able to get our hurling going in the second half,” said Turloughmore’s Francis Forde afterwards.

“When you are so long out of the limelight, getting back to it, maybe that was a factor, I’m not sure. You have to give enormous credit to Thomas. There is a reason why teams like this get three in a row: they just worked us off the pitch in the second half. It was a great year, a bonus year from the word go because we thought for so long there wouldn’t be a championship. And of course we are gutted.

“But there are bigger things, not alone the pandemic and sometimes you have to take these things on the chin.”