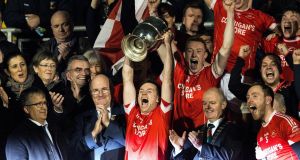 The O’Connor brothers conspired to bring Ballintubber their fourth Mayo county senior football championship title when they outwitted Breaffy at Elvery’s MacHale Park, Castlebar, on Saturday night watched by a crowd of just over 8,000.

Cillian produced seven of his side’s total – including six from frees – but the most telling contribution of the night came from his sibling Diarmuid who fired home the winner on his trusty left leg, three minutes from the end of normal time.

With five minutes of injury-time announced, Breaffy had both time and opportunities to keep their hopes of winning a first ever senior title alive by forcing a replay but Ballintubber’s experience of three previous campaigns when they brought home the Moclair Cup stood to them in tense finish.

It won’t go down as a classic by any means with both teams doing a lot of shadow boxing in the first half in particular, which was shaded by Ballintubber – 0-6 to 1-2.

Breaffy couldn’t have hoped for a better start than a goal from the penalty spot which was drilled home by Peter Dravins after Aidan O’Shea was taken down in the square when he plucked the ball from the sky.

But Cillian O’Connor hadn’t even chalked his cue at that stage and Breaffy were reeled in gradually, Steven O’Malley and Damien Coleman also on target for Ballintubber.

Both teams cut loose to some extent in the second half which produced some excellent points, a fine effort from the wily Alan Dillon and a superb long range effort from play from Cillian O’Connor pushing Ballintubber’s lead to two six minutes into the second half.

When Conor O’Shea nailed back-back frees it seemed for a moment at least that this might yet be Breaffy’s night but Diarmuid O’Connor – as he has done all season – backed himself to have a go and his point ensured the Moclair Cup was going to rest near the abbey in Ballintubber for another year.