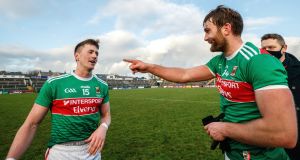 That their best tacklers are positioned in the full forward tells you everything you need to know about Mayo’s 2020 edition.

Aidan O’Shea, Cillian O’Connor and Tommy Conroy have scored 2-14 (from play/marks) in three matches en route to claiming a first Connacht championship in five years. That’s 51 per cent of the team’s scoring total (again from play) coming from three players. Although emphatic, that has not been their most telling contribution. The Mayo full forward line averages more than six turnovers per match.

So far in this championship, the Mayo team has made 68 turnovers (direct turnovers, dispossessions or interceptions). James Horan will be thrilled to know that 32 of them – or 47 per cent – were made by a forward. And 19 by O’Connor, O’Shea or Conroy, which equates to 28 per cent. Almost a third of their overall turnovers took place in the opposition’s defensive areas.

Those turnover counts of course exclude the winning of 50/50 contests or regaining the ball through the opposition's clear errors in possession.

Mayo’s game plan is now based upon a high press and counter pressing. While at times – like nearly every team in the modern game – they can end up with 13, 14 or even 15 men behind the ball it’s how they achieve this set-up which sets them apart.

When Mayo lose the ball their forwards, who are generally closest to possession, press with a ruthless intent to reclaim it. The difference with them and most other club and county teams, however, is that when they are bypassed, or if a player is not immediately in the action, they do not hand over duties. Nor do they just run back and mark space.

The Mayo forward line tackle and track runners right the way down the field, and commit entirely to their defensive duties until possession has been recovered. This is very rare. It affords those behind them, and sometimes a half forward, time to fill in if an early turnover hasn't been won.

The only time a Mayo forward will remain in the inside line while his team-mates work their socks off, is if they were well away from the play upon the loss of possession, and the defender marking them has made no effort to join the attack.

Jürgen Klopp’s Liverpool put counter pressing into the mainstream – with Mane, Firmino and Salah setting the tempo up top for their recent successes. Different sports, same principles. But it takes a certain personnel to play in this way. It's about a lot more than just heart.

Since football’s resumption, Mayo have introduced players such as Tommy Conroy and Ryan O’Donoghue at one end and Eoghan McLaughlin and Oisín Mullen at the other. Young footballers with raw pace and athleticism, honest and it seems impressionable too. They’ve joined a squad where playing with intensity is non-negotiable, and where there is an adherence to the art of tackling.

These principles and this culture has its roots in Donie Buckley’s six years coaching the team (2012-2018). The likes of O’Connor, O’Shea, Lee Keegan and Chris Barrett were a part of the squad throughout that time.

They are the four Mayo players with the highest turnover numbers in the championship thus far. Top scorer O’Connor has made the most turnovers – nine – followed by Lee Keegan with seven. He often tracks men upfield or finds himself up there after joining an attacking move. O’Shea, Barrett and Mullen have all registered six turnovers to date.

Other players with impressive counts include Jordan Flynn with five, Diarmuid O’Connor in a similar half forward role, Conroy and McLaughlin are all on four. Matthew Ruane gets through a colossal amount of work in the engine room, providing so many of the tackles that precede a turnover, he and Patrick Durcan have made three apiece.

Fourteen of the squad have registered turnovers and eight of them are forwards.

If this tackling has been a mainstay since 2012 what’s the difference this year then? For one there’s the rotating of positions. O’Shea in particular, now setting the precedent in the first line of defence. There’s an increased demand to tackle thoroughly, continually, and higher up the field as a collective. But pushing up leaves space in dangerous places, which can be a positive and a negative. Mayo now have the players with the required athleticism to minimise the risk and exploit the opportunity on the counter-attack.

This incredible effort out of possession is as much a form of attack then as it is a defensive tactic. Which is where the counter press really kicks in. Mayo have scored 1-19 with the possession originating from a turnover.

So Tipperary defenders beware. And the goalkeeper too. In the last three games Mayo players have made contact with the opposition goalkeeper in possession four times – turning him over twice. On both occasions it was O’Shea. Big Aidan, with his basketball background and powerful physique, is one of the best tacklers in the game and he will punish any lack of concentration.

It’s not all bad news for Evan Comerford though. The Tipp goalkeeper is likely to get plenty of long kickout opportunities to show off his full range and distance in this weekend’s All-Ireland semi-final.

While this new look Mayo appear so impressive in transition, and without the ball, they have so far been easy pickings under the long kickout. In the Connacht championship teams kicked long against Mayo 81 per cent of the time. And for what should be a very competitive stat, they were beaten 72 per cent of the time. And have conceded 15 marks in three matches. Mayo’s middle third have been struggling desperately to win primary possession.

Teams in general are kicking longer this year – but Tipperary for one need little encouragement to do so. They went long 83 per cent of the time in the Munster final and scored 0-4 from their wins. Steven O'Brien will be by a distance the most accomplished midfielder Mayo have faced in getting to this stage.

But when your top scorer - and the top scorer in the entire competition - is leading your turnover count you’ll be there or there abouts against any team. Even if you can’t get to grips around the middle.