Nicky English: Helter-skelter hurling of 1995 final is scary to look back on 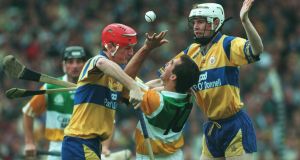 After what had been a blistering summer, the weather ran out in early September and the All-Ireland hurling final was played in wet and windy conditions.

Clare led by Ger Loughnane, bestriding the championship like a revivalist preacher, were the story of the summer, winning a first Munster championship since 1932 after which everything else was a bonus.

The final against Offaly was edgy and low scoring. The champions had only really opened up that summer in blowing Kilkenny out of the Leinster final and their inability to close the deal after Johnny Pilkington’s goal put them three up, cost them in the end.

There was drama aplenty. Clare full back – and current manager – Brian Lohan finished the match playing with a torn hamstring and Eamonn Taaffe, not listed in the programme came in on 50 minutes for Stephen McNamara and scored the decisive goal in the 66th minute, pouncing when Anthony Daly’s free came back off the crossbar.

In commentary Ger Canning says before Daly strikes that Taaffe is to be substituted. Seconds later, he scores the goal and is immediately replaced.

Scores level, Clare’s nerve is steadier and a 65 by Daly, followed by a Jamesie O’Connor free, takes them to a first All-Ireland in 81 years.

In a way it was scary looking back at this. In 1995, I was still playing and had another year before calling it a day but it doesn’t feel that long ago. The hurling though is almost unrecognisable.

Paul Earley said in relation to the Football Review Committee that one of the reasons why the game compares badly with hurling is that the ball isn’t contested nearly as much.

Looking back at this match, it’s clear that even in modern hurling the ball isn’t contested as much as it was back in the era of the 1990s.

It’s fair to make some allowances for the poor conditions on the day but there is nothing like the time and space that players have now or at least would create for themselves these days.

Clare and Offaly gave each other hardly any space. There was far more hooking and blocking, tight marking and ferocious contests for the ball – helter-skelter stuff. As a result there’s nowhere near as much considered striking of the ball unlike the current game where it’s almost like playing your own ball and seeing who ends up scoring the most.

One of the reasons why there’s so much hooking and blocking is that players are attempting shots from positions they shouldn’t have been. Today you’d scoop the ball away or hand-pass it whereas back then everyone’s just trying to get rid of the ball, preferably as far away as possible.

It’s no surprise that the two best players on view were Brian Lohan and Kevin Kinahan, the two full backs. With all the high ball coming down on the square their job was to win possession and clear.

They got blocked on several occasions but in the modern game they wouldn’t be looking for an almighty clearance all the time: there’d be a hand-pass back to the goalkeeper or a short stick pass to a spare man.

Certainly a corner back wouldn’t have the modern comfort zone, allowing him to take a whizzed puck-out with his back to whatever was coming at him on his own 20-metre line.

Even the crowd in the stand in 1995 would have got a heart attack if that happened. People are conditioned to it now – even Brian Cody!

The ferocity of the contest was reflected in the number of hurleys broken. From the third minute when Offaly full forward Pat O’Connor lost his, I counted four in the first half alone.

PJ O’Connell would probably have got a red card these days for a head-high challenge on Brian Whelahan, with his hurley straying up around the helmet. There was no intent or malice there but anything around the head generally gets you your marching orders in the modern game.

From the throw-in differences are obvious. Instead of trying to get possession, players let fly at the ball just looking to move it on. The first six plays are attempts to hit the ball along the ground – something very few opt to do now.

Eventually, PJ O’Connell’s stroke goes to Daithí Regan whose point in the first minute bodes well for the scoring rate but that’s not how things turn out. Clare take 11 minutes to score their first against Offaly’s two.

Regan’s delivery of ball from the ground was outstanding but these days people would look at what the reward was rather than simply seeing the glory of a well-hit ground ball.

It’s an exciting contest because neither team gets away from the other but the hurling’s not great. To be fair conditions were poor with rain falling but in general touch isn’t as good as the modern game and scoring a lot more laboured.

By half-time Offaly lead 1-6 to 0-7 – the late goal by Michael Duignan not something Davy Fitzgerald would remember fondly after what had been an excellent season for him.

The final score of 1-13 to 2-8 was the lowest since 1987 when Galway beat Kilkenny 1-12 to 0-9, also on a very wet day but that too represents the difference in hurling styles between the contemporary and back then.

In some ways the game isn’t as disciplined these days in the context of responsibility for marking another player. Play is looser and has evolved into more of a scoring fest, which is what we want.

Equipment is far better because it’s far more consistent, thanks to standardisation. The shape of the hurleys is different. They’re longer than they would be now and the head or the bas is about half the size, which means the sweet spot on a modern stick is bigger.

Speaking to hurlers of my generation, when they puck around with their sons, there’s way more control with the hurleys. Sliotars are arguably too light now but they are beautiful to play with.

Standardisation has been a great improvement. For instance, look at the number of sticks broken in the 1995 final: if you broke your hurley back then you’d be devastated and not convinced that you’d be able to hit the ball as well with the new one.

In 1995, the definition of a good puck-out is how far you can hit it with maybe some thought put into the trajectory – but no matter how high it ended up going in the end, the farther it went the better.

This in turn creates the aerial contests. The battle between Clare centre forward PJ O’Connell and Offaly centre back Hubert Rigney is like a microcosm of the different styles. It’s ferocious but entirely legitimate.

Their job is to contest the ball. PJ’s role is to get it past the centre back, breaking it through the defensive line. Nowadays there’d be a sweeper there to pick up any loose ball but 25 years ago, he’s creating a secondary contest for one of his inside forwards.

He wants the outcome of the contest to be the ball in behind his man whereas Hubert wants it back out in front of him – the centre back’s function hasn’t changed as much but it’s not the same.

Mistakes helped to swing the outcome but it was an autumn day, not summer, which made conditions more difficult. Clare dominated the second half but their inability to take scores nearly cost them in the end.

They’d just 0-7 scored by half-time and with nearly half an hour gone in the second half, their total was only up to 0-10. In other words they managed 1-3 in the last five minutes or so.

Leaving out goals, overall they’d just seven points from play and four of those came from Fergie Tuohy who had a memorable afternoon, leaving three for everyone else. Offaly had only 0-4 from play. That’s 0-11 altogether. The figures for the last three All-Irelands average 0-28 from play, again not including goals.

It was a characteristic of the Clare team to be able to win despite a patchy conversion rate – 16 wides in this match – which was to their credit and also reflective of a very powerful defence with Ollie Baker coming back in a defensive midfield role.

Offaly made their own mistakes. After Johnny Pilkington’s goal put them three points ahead, 2-7 to 0-10, they missed a succession of chances to go four up but never managed it. As a result they were vulnerable to Clare’s late burst.

I don’t really enjoy watching old matches. Knowing the score spoils the whole experience no matter how enjoyable the result is but this was an interesting snapshot of a time that looks a lot farther away than it feels.

Ireland name squad for conclusion of Women’s Six Nations 10:33
Graeme McDowell seeking confidence boost after tough US Open 10:21
Blow for Australian rugby union as Qantas end sponsorship 10:35
Nairo Quintana says he has nothing to hide amid doping investigation 09:25
Jamal Murray to the fore as Nuggets hold off Lakers comeback 09:02
Crossword Get access to over 6,000 interactive crosswords