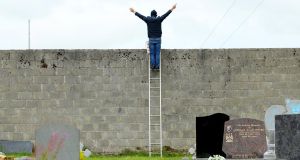 Spectators will be in attendance for Ulster Championship games that are held in Northern Ireland this winter, even if matches elsewhere on the island remain behind closed doors.

Ahead of this weekend’s Central Council meeting at which the go-ahead for a 2020 championship is expected to be given, Ulster Council chief executive Brian McAvoy has said that as long as the venues meet local health and safety guidelines, he sees no reason to discontinue the current situation where up to 400 people have been attending club fixtures.

“I would hope that certainly within the North, the current situation will prevail and that we will have crowds at games,” says McAvoy. “And in fact, I would hope we would have a few more than what we have currently, within reason. Hopefully, by then, there will be spectators at games in the South as well.

“We are well within the prescribed number in every ground. We could extend it and still be well within the regulations. But we are well aware that we’re an all-island organisation and we don’t want to be doing anything that could jeopardise efforts or potentially derail things down the road.”

There were suggestions in some quarters over the weekend that the GAA will decide at Central Council this Saturday to put all 2020 championship games behind closed doors. But according to the Ulster Council, the plan in the six counties is to have at least 400 at their games.

“We might increase that for semi-finals and finals but at the minute, it’s 400. But if you look to other sports, the Irish Cup final at Windsor Park between Glentoran and Ballymena United had 500 at it. We would have county grounds that are bigger than Windsor Park so there would be no issue with the regulations if we increased those numbers as time passes.

“That is hopefully the way it will go because as you look across at other jurisdictions, the crowds are starting to come back as well. There are pilot programmes at soccer games in England ongoing, up to 2,500 at games over there. Spectators are back in France, they’re back in Australia, America, quite a lot of countries. The evidence so far hasn’t shown cases arising out of going to sports events, none that we’ve been made aware of anyway.

“For now, we’re happy to cap it at the level we have. We are conscious of being an all-island organisation. We’re conscious of what Dr Ronan Glynn and his cohorts have been suggesting about people congregating around games. Even though, I would say our experience is that people have tended to go home pretty much straight away after games.”

The Ulster Championship is due to start on Halloween weekend, with Cavan and Monaghan down to meet in the preliminary round. Regardless of any change in the regulations on crowd sizes North or South, McAvoy says it would be highly unlikely that the Cavan-Monaghan game would be moved to Enniskillen or any other ground in the six counties so as to allow spectators attend. “It would be perfectly legal and we wouldn’t be breaking any regulations but I just don’t think it would be the right message to be sending out,” he says.

As for the Ulster final, it is likely to be shifted away from Clones for the first time since 2006, albeit for reasons that have nothing to do with crowd sizes. Since St Tiernach’s Park has no floodlights, staging an Ulster final in November would be close to impossible.

“Let’s be honest, to play an Ulster final in Clones, the game would have to throw in no later than 12.30. It’s on November 22nd and we’ve got to allow for it to finish on the day and we’d obviously like for whatever limited amount of people can go to it to be leaving the ground in some form of daylight.

“At the end of November, it will be getting dark in Clones around four o’clock. Realistically, you’d have to be starting the game at 12.30-12.45 at the latest. For TV scheduling alone, that would present difficulties. No decision has been made yet but Clones would seem unlikely at this stage.”