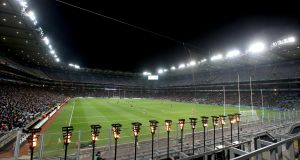 Torches were lit on Hill 16 during the 95th anniversary of Bloody Sunday during the International Rules Test between Ireland and Australia in November 2015. Photograph: Ryan Byrne/Inpho

This month will see the opening of the GAA Museum’s Bloody Sunday centenary exhibition and as part of the ongoing projects to mark the commemoration, the GAA website is to feature short video representations of the 14 people who died at Croke Park in November 1920.

The sequence begins with Jane Boyle, the shop assistant, who was to be married the week after the Dublin-Tipperary challenge match. Every week, a new video in memory of the other 13 will go up.

Other events and initiatives announced on Wednesday include a microsite on gaa.ie, dedicated to the centenary activities. This will include a podcast, The Bloodied Field, named after the book and definitive account of Bloody Sunday by Sunday Times journalist and historian Michael Foley, who will present the eight episodes.

Next November will see a television documentary, again based on ‘The Bloodied Field’ broadcast by RTÉ.

Other events include a legacy memorial for the dead to be unveiled in front of Croke Park on Jones’s Road.

“Behind the history and the headlines of the crown forces attack on Croke Park in 1920 is a human story and a human tragedy. The appalling events of that Bloody Sunday changed the GAA and forever altered our relationship with the pitch at Jones’s Road.

“How a place envisaged to be a home of unconfined joy was turned into a scene of carnage and horror is a tragedy that will never be forgotten. To honour those who went to a match and never came home we need to remember them, to pay our respects, and that is what we intend to do.”