Where it was won and lost: Turning points in Dublin’s final victory 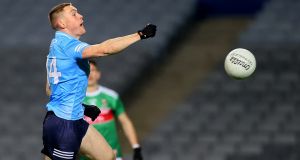 Accelerating from zero to 60 in 13 seconds, Dublin get the dream start that only Mayo themselves could have dreamed about. Aidan O’Shea joins Diarmuid O’Connor at midfield for the throw-in, up against Brian Fenton and James McCarthy, and O’Shea manages to get the first touch for Mayo.

Yet in doing so McCarthy sweeps in on the breaking ball and takes off for the Mayo goal. Affording himself a slick one-two with the equally paced Niall Scully, he keeps going before sending a lobbing pass over to the unmarked Dean Rock to the left of the goal, who calmly palms in the fastest goal in All-Ireland football final history.

Fenton steps it up for Dublin

After Mayo responded with three unanswered points, Brian Fenton makes a start of it, walking the ball in towards Eoin Murchan, before Paddy Small wins a free: Rock converts and Dublin are ahead again.

Fenton also plays a hand in Dublin’s next score, holding on to possession to draw another foul, again converted by Rock. In the next move Fenton wins the kick-out, that passage of play finishing with a point for Seán Bugler.

A work of football art by any standards that turns everything back in Dublin’s favour in the 23rd minute. Mayo had managed to get themselves two points in fronts, two excellently taken marks by Cillian O’Connor, before O’Callaghan starts and finishes a superbly patient and intent passage of play. The Cuala player displayed incredible verve to get into a position in front of goal, and then had the strength to punch Scully’s deft delivery into the back of the net.

It is a standout move that defines the contribution of both O’Callaghan and Scully, key interventions with the minimum of fuss, particularly from O’Callaghan, who was otherwise so well guarded by Oisín Mullin.

Black-carded for a third-man tackle shortly before the half-time break, the loss of Robbie McDaid for 10 minutes could have been a big worry for Dublin, and offered fresh hope for Mayo, who found themselves two points down at the break.

Instead Fenton’s patience and perseverance quickly begins to pay off handsomely after he holds up the ball four minutes into the second half, that play resulting in a first score for Scully, superbly taken.

Mayo respond with a free from Cillian O’Connor, before Fenton again proves his worth when two minutes later, as if on cue, he turns, spins and drops Diarmuid O’Connor, and makes no mistake this time, scoring his first trademark point from play.

Coming off the second water break and into the final quarter, Mayo still appear to be in a very good place, drawing level again on 50 minutes, before Rock edges Dublin back in front again after Scully was fouled somewhat naively by Eoghan McLaughlin.

Then Dublin move up another gear that Mayo don’t have the bodies or will to match. Fenton starts lording the kickouts, his mind appearing to turn towards Ciarán Kilkenny, how to bring him more into the game. Two passes are sent straight into his vicinity, the move in the 58th minute so doggedly played by Kilkenny that he eventually gets his first point of the match.

Again Fenton shows the way, Dublin moving the ball across several lines in the middle of the field before Fenton passes off to Scully, who sets up Brian Howard for his point, a move with the Raheny club-mates written all over it.

When Aidan O’Shea fouls Scully, Paul Mannion makes his presence felt with a sweetly struck free, and just like that the game drifts away from Mayo. There is another move that perfectly illustrates this: Darren Coen gets a final point back from Mayo, seemingly keeping some hope alive, only for Fenton to win the Dublin kickout with a perfectly executed mark. It helps set up Dublin’s last score, and the last of the night, when Davy Byrne also completes his return to form to set up Kilkenny’s second.