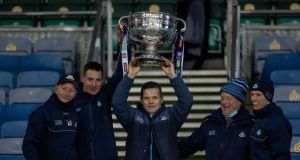 In the last search for words, in the vacant stadium, in the still of the wintery night and the city seemingly asleep outside, it at least felt normal for Dessie Farrell to appear at a loss for them.

The December night, more than any of the privileged few allowed inside, had brought him its own pressure, perhaps more than anyone else in the pandemic year: Dublin had already broken into championship winning history, and defeat would leave Farrell’s name forever associated with the ending of it.

Farrell – who lost his first two All-Ireland finals as Dublin minor and under-21 manager – could hear those that said this had to be Mayo’s year of all years, and perhaps of all the years this was the one for Dublin to lose.

So when he was asked to put the whole thing into words, Farrell at first found the need for only one

It certainly wasn’t easy or straightforward, and on close inspection Farrell put some more words and meaning to what Dublin had achieved, and how exactly they went about it over the longest year in championship history.

“Obviously, a bit of relief in there too,” he added. “I am thrilled for the players, it’s been a long, long year. I am so happy that they got the result, and it is a just reward for how they applied themselves throughout the year.

“We knew they [Mayo] were going to go toe-to-toe. They’re very good at bringing that high-octane intense type of a game, and it was very, very challenging for us.

“It was going to be even more so in the second half, a man down. They were able to get themselves reorganised you would have thought at the half-time break to have a right good go.”

That sin-binning of defender Robbie McDaid instead of being a potential turning point was more the defining point, Dublin scoring first point of the second half, Mayo’s apparent advantage counting for nothing.

“We spoke about it at half time, how important it was not to capitulate at that stage, because up until half time we were struggling with their high press. But we banged heads on it as coaches and then turned it over to the players in terms of what we wanted them to do, or how we’d try to manage our way through that, and I think getting out the other side of that probably provided us with the platform for victory then.”

There were also some generously complimentary words for Mayo, with Jonny Cooper echoing his manager by saying Dublin needed to adjust their own game at times to cope.

“Savage team,” Cooper said of Mayo. “And they’ll always have that level of force and intensity. You expect it, but only when you are in it you try and figure it.

“There is a bit of experience too because we have been there before. We know how to stay calm and execute. And being able to execute under pressure was the key one for us, just knowing to stay composed and stay calm

“Obviously it’s not going to be perfect and it wasn’t, especially playing against a quality opposition.”

Cooper also pointed to Dublin’s capacity to cope with being a man down.

“From our point of view we managed to control it for a couple of minutes at the start which managed to give us a little bit of a footing. Then we got the full complement back, gave us a bit better opportunity just to settle things down, but it was probably nip and tuck there for a while until maybe towards the end it widened a small bit.”

While players like Stephen Cluxton, Mick Fitzsimons and James McCarthy were winning their record-equalling eighth All-Ireland football medal on the field of play – with others like Darragh Macauley and Kevin McManamon on the sideline – other Dublin players were winning their first.

Among them was McDaid, at age 27, who like his manager lost his first final as a minor back in 2011, and then had to wait to turn that around nine years later.

“It’s a long time coming,” McDaid said of his first All-Ireland, his sin-binning coming just a minute before half time, probably being good timing.

“It probably happened at a great time, just before half time,” he said. “We got to come in and reset and refocus. I thought it was a bit harsh on me, to be honest, but I won’t say much more.”