Leinster MHC: Offaly can complete a double after seeing off Westmeath 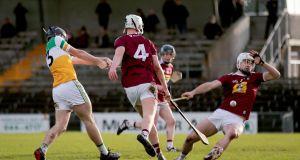 Offaly will compete in both Electric Ireland Leinster minor finals after their hurlers turned in a strong second-half performance to dispatch Westmeath in Mullingar.

Luke Carey and Daniel Bourke struck the goals for Offaly though they had to come from two points down at the interval to secure their 2-18 to 1-8 win.

Their reward is a final clash with Kilkenny, who overcame Wexford by 0-23 to 1-14 in the other semi-final, in what will be Offaly’s first final since 2003.

Both the minor football and hurling finals are currently scheduled for Sunday, January 3rd but with Offaly containing several dual players, including the excellent Cormac Egan, a rescheduling seems likely.

Leo O’Connor’s Offaly hurlers got a great start against Westmeath with Carey netting in the opening minute following a turnover in the hosts’ defence.

David Williams struck to the net shortly after for Westmeath and with the wind advantage the underdogs pushed on to lead by 1-7 to 1-5 at half-time.

Resurgent Offaly levelled it up at 1-8 apiece in the 40th minute and reeled off an impressive 1-13 without reply from there to win at their ease.

Lochlann Quinn, Egan and Carey again were all on the mark with points and Bourke sealed the big win with Offaly’s second goal from close range in the 60th minute.

Kilkenny had to come from behind in similar circumstances with Billy Drennan their inspiration, shooting 0-14 against Wexford.

It’ll be the Cats’ fourth provincial final appearance in a row but, while they burst into an early 0-5 to 0-1 lead, they then conceded 0-10 without reply and trailed 0-12 to 0-6 at half-time.

The second-half was all about Kilkenny and free-taker Drennan in particular who reeled off four points in a row at one stage while Denis Walsh, Timmy Clifford and Gearoid Dunne also got on the scoresheet.

Luke Murphy fired the Wexford goal and finished with 1-1 while Cian Byrne top scored for the hosts with 0-7.