Tyrone slow, quick, slow their way to the All-Ireland final

Can this approach stop Dublin’s march to four All-Ireland titles in a row next month? 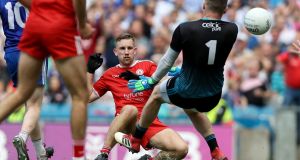 Tyrone’s Niall Sludden scores the only goal of the match. Photograph: Tommy Dickson/Inpho

Maybe, just maybe, Tyrone have discovered a formula to poison what last night seemed Dublin’s relentless march to four All-Ireland titles in a row. This slow, quick, slow approach to Gaelic football is far from thrilling to witness but the real achievement was how often Tyrone tactics silenced the large Monaghan contingent in this 49,696 crowd.

Heroes everywhere. If Colm Cavanagh keeps this up he will be seated beside the brother in the GAA hall of fame, Tiernan McCann was also superb while Peter Harte finally offered a performance on the big stage to match his undeniable talent.

The wonder now is if this approach can be effective against Jim Gavin’s team on September 2nd.

Can the undisputed champions be dragged into a lifeless embrace?

Others have tried and failed but Harte’s side look best equipped to deny Dublin. At the very least they have earned the right to attempt as much.

An example. From Lee Brennan’s free to make it 0-11 to 0-9 in Tyrone’s favour on 45 minutes there was no score for nine boring minutes of keep ball.

That’s when Conor McManus’ fourth free made it a one point game, again.

Defensive systems ruled (or ruined depending on one’s perspective) this All-Ireland semi-final.

It had to be this way. So much was on the line for both counties. To allow Monaghan return to an All-Ireland final for the first time in 88 years without at least trying to suffocate their attacking efforts would have been folly (that’s one trait we know Harte’s teams will never possess).

It came down to the wire, naturally, when Kiernan Hughes arrived to level matters as the clock ticked towards the hour mark.

That’s when the real drama unfolded. A brilliant block by Kieran Duffy on Tiernan McCann resulted in Hughes being fouled up the other end.

McManus gave Monaghan their first lead of the game with 61 minutes played. From the kick out Drew Wylie leaped into the midfield to break ball.

What did Tyrone do?

Same as always, they turned down the dial and patiently waited to exhale. This response earned them the right to progress. Peter Harte slipped away from Fintan Kelly, fed McCann whose shot was blocked but Niall Sludden arrived to plunder a goal.

Round 12 of a eliminator fight was upon us. Cavanagh bounded forward, drew the foul, Harte pointed.

What did they do?

Slowed it all down, yet again, through Mattie Donnelly.

It proved Harte’s coming of age moment. He sought the ball, taking an awful clip from Drew Wylie but still made it a three point game.

Wylie refused to go quietly, storming forward for a point, but Tyrone kept the ball, played the percentages, knowing victory tends to follow. Cavanagh held his end up with a perfect strip of Jack McCarron at a vital moment.

Looks can be deceiving. Tyrone owned the first half yet the scoreboard showed both teams on 0-8. Some dodgy shot selections by Frank Burns and Connor McAliskey aside (very un-Dublin like), they looked the more composed outfit.

Monaghan made uncharacteristic mistakes that betrayed a collective nervousness.

From the throw in Pádraig Hampsey went to McManus and the match upworked because McCann and Cavanagh devoured every ounce of oxygen near the great Monaghan forward.

Two goal chances did fall Monaghan’s way - both for Vinny Corey - but they were snuffed out by McCann and other Red Hand hunters.

McManus did post 0-4 in the opening half, including a towering point inside two minutes, but Tyrone already had 0-2 on the board from Cavanagh and Sludden.

It just felt like Tyrone would control the tempo enough to progress.

Monaghan also took a few pot shots to make this contest seem like a different sport having witnessed Dublin’s exhibition on Saturday evening.

So that’s how this All-Ireland semi-final was gently flowing along until a Niall Morgan error woke the large brigade of Monaghan people.

McCarthy hit his second score three minutes before half-time but Tyrone’s usual response did not follow as Morgan was punished for kicking a rolling ball. Off the throw up McCarthy clipped his third point to level matters.

Monaghan sprinted away for the break while Harte gathered his men on the 45. Such confidence and control radiated over the second half.