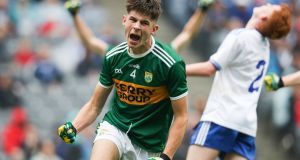 Dan Murphy could have made life a lot easier for his Kerry minor colleagues at Croke Park on Sunday before they booked their place in next months’s final against Galway.

Mind you, if the Kingdom wing back had slotted his 56th-minute goal opportunity instead of dragging his kick just wide, we wouldn’t have had the remarkable finale we did.

Kerry, who’d just conceded a goal to Monaghan, would have reopened a six-point advantage if Murphy had converted but he didn’t and moments later they were on level terms when Monaghan scored their second goal.

Five minutes later again, and now in injury-time and roared on by a huge crowd filtering in for the senior game, Monaghan moved ahead for the very first time when Donnacha Swinburne pointed.

Manager Séamus McEnaney said afterwards that the plan all along had been to stick with Kerry for 40 minutes and then push up on them and press hard.

That plan failed to account for what Kerry boss Peter Keane described as “guts, heart and resilience”, traits his players called upon when scoring the last three points of the game.

Paul Walsh got the first two of those points for Kerry, from frees, and sub Jack Kennelly got the last to secure a final date with Galway on September 2nd.

Kerry will bid for five All-Ireland minor titles in a row on that occasion and, incredibly, their 30th win in a row at the minor grade, albeit with an under-17 team this year, though it didn’t look great when that second Monaghan goal flew in.

“I said, ‘s**t’ straight away, that was my first thought,” said manager Keane. “But I also felt there was still time, if we could just steady ourselves. We were in a similar position against Cork below in Tralee when they came at us. These guys remained calm and that’s the one great thing about them.”

It was even more impressive from Kerry as they were reduced to 14 in the 46th minute when defender Conor Flannery received a black card on top of an earlier yellow, adding up to red.

They led by seven at that stage and looked to be cruising after building on a 0-10 to 0-6 lead with a goal early in the second half from David Mangan.

Dylan Geaney, brother of 2015 minor final star Conor, was excellent in the first half and hit five points, although the last 20 minutes or so was all about Monaghan’s heart and determination.

“We did that and it paid dividends. If I was to write the script I couldn’t have written it any better – we were a point up exactly when I wanted them to be. It was all about getting them towards the end of the game ahead and unfortunately we just didn’t get across the line.”

Walsh was terrific late on for Kerry, converting a 63rd-minute free to level it and another from an even tighter angle in the 66th minute to move them ahead before Kennelly’s insurance score.

France expected to receive elite athlete’s exemption to travel to Dublin 14:10
Once pain of defeat eases Frampton will be glad it is all over 14:03
Leinster submit detailed plans to Government for safe return of spectators 13:15
‘I shredded everyone’s nerves, I’ll try to win more emphatically next time’ 11:08
Nick McCarthy to re-join Leinster from Munster 10:38
Crossword Get access to over 6,000 interactive crosswords