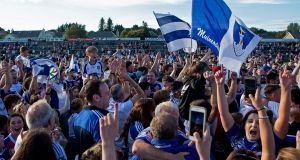 Delighted Monaghan fans at Pearse Park, Salthill celebrate the victory over Galway which earned the county a semi-final place against Tyrone. Photograph: Laszlo/Geczo

I don’t know what Paris in 1968 felt like, or Berlin after the wall came down. But last Saturday night in Salthill must have been the Monaghan GAA equivalent. The air was heady, the possibilities limitless. A new generation had risen to throw off the weight of the past. Anything could happen now.

It was partly the setting. If you’re from Monaghan, your world view is usually limited by drumlins. Or as Patrick Kavanagh put it in a formal complaint to the county: “You flung a ditch on my vision”. In ditch form or otherwise, the horizon is never far away there, so that even a trip to Kildare can be dizzying.

But in Salthill on Saturday, the combination of sea views and a place in the last four of the All Ireland was mind-blowing. Liberated from the little hills, older Monaghan supporters strolled along the promenade in a happy daze. Younger ones bucked and leapt with excitement, like calves who’d spent the winter months in a shed and had been let out into daylight for the first time.

Some of us were daring to gaze even further than a semi-final. There’s a plaque in Galway, down near the Spanish Arch, that speaks poetically of how in 1477, on a visit to these shores, one Christopher Columbus “found sure signs of land beyond the Atlantic”.

Well in similar vein, the more optimistic Monaghan fans were now seeing sure signs of an All-Ireland final, somewhere out there.

The majority of pessimists, meanwhile, were enjoying the moment, as history has taught us. The fallow periods in Monaghan football can be long, God knows. They have even been known to last entire broadcasting careers, as in the case of the great Micheál O’Hehir.

O’Hehir made his debut as a radio commentator on another Monaghan-Galway match: the All-Ireland semi-final of 1938, won by Galway. It wasn’t unusual for Monaghan to be in a semi-final then: they had actually won one a few years earlier.

But O’Hehir would be nearing retirement, 41 years later, when he next had the honour of welcoming us to the last four. In 1979, as a teenager, I was part of what seemed a vast army that marched on Croke Park, dreaming big, and oblivious to the massacre Kerry were about to inflict.

O’Hehir did justice to our numbers, at least. He described half of Monaghan descending on Dublin, “from Ballybay and Shantonagh and Kilkit”. “Wherever he got Kilkit,” my father laughed (and we’re still wondering).

Massacre and all, that was the start of a relative glory era. But by the time we made the semis again, six years later, O’Hehir was gone, his famous voice silenced by a stroke.

So he never got to call the epic last-minute free with which Eamon McEneaney earned a draw against Kerry, nor the replay, nor the 1988 semi-final against Cork, our last until this weekend, when Monaghan’s chances seemed to be blown away in a first-half gale.

With that, another 30 years of darkness descended on the drumlins, although it was nothing like as complete as before. There was more than an age gap now between me and my father. He was of similar vintage to O’Hehir, so that 40 years of nothing had turned him into a pipe-smoking stoic who always expected us to lose, sooner or later, and he could be annoyingly cheerful when this happened.

My generation, by contrast, had learned to have expectations, for which people like Sean McCague – manager for the 1980s triumphs – and Páraic Duffy were responsible. I remember McCague speaking of the responsibility he felt to establish “a winning tradition” in the county. And he did, sort of, because even at their lowest fortunes in the 1990s and beyond, Monaghan were a team that on any given day, could punish the careless mighty.

This and Barry McGuigan, whose world featherweight title coincided with the 1985 successes, may have given rise to the cliché, now hated by many Monaghan fans, of a county that punches “above its weight”.

But how else to describe the nine-point thumping of All-Ireland contenders Donegal in Ballybofey in 1995, or the welcome back to earth for champions Armagh in 2003, when a raw Monaghan team (including Vinny Corey, then young, now ageless) knocked them out of Ulster in the first round.

I made the mistake before that game, in a column for this newspaper, of lamenting my fate in being from one of the GAA’s no-hope counties. The new backdoor system was no use to us, I complained. It would need “a side door, French Windows, and cat-flap” to extend our summer into August.

Reading the subsequent flood of gleefully sarcastic emails from fellow supporters, none of whom had had any doubts we would beat Armagh, I learned never to dismiss our chances again. As a Monaghan fan, you must always have hope. That’s the cruel thing. Sure enough, we lost the next game to Down.

The arrival of Séamus “Banty” McEnaney as manager soon afterwards elevated the hope to new levels. There was never a dull moment with Banty in charge: you wouldn’t know what he’d do next, (“Darren Hughes? In Goal? You’re joking me!). But, in general, he relit a fire under Monaghan football, circa 2005, and it hasn’t gone out since.

His misfortune – a recurring one for managers of promising Monaghan teams – was to run into Kerry at the top of their game. It happened in 1930, Monaghan’s only appearance in a final, during Kerry’s first four-in-a-row.

They probably didn’t need any extra edge then, although circumstances gave them one. Thanks to Eoin O’Duffy, Monaghan were seen as a Free Staters’ team. Kerry were anti-Treaty. Thus the game was dubbed the “last battle of the Civil War”, with violence levels to match. This time the ’Staters lost.

The 1979 Monaghan ran in to another 4-in-a-row Kerry, while the one that beat us in ’85 managed only three All-Irelands on the trot. In 2007, they had to make do with a mere two-in-a-row, but in the process dealt us a gut-wrenching last-minute defeat.

So when, last month in Clones, Kerry pulled off a robbery to rival the Northern Bank job, our depression had 90 years of history attached. It was like the movie Friday the 13th, where they think they’ve finally finished off the serial killer and then a hand shoots up out of the lake, and sure enough it’s Kieran Donaghy’s hand, breaking the ball down for a goal.

Hence the pitch invasion at the final whistle in Salthill. When visiting exotic venues, Monaghan supporters always like to walk the field afterwards anyway, as if they’re thinking of buying it. It might be just the novelty of seeing flat land. But this was an emotion-fuelled cavalry charge. And after all, it may have been the first time we beat two teams simultaneously: Galway and the one we hadn’t finished off in Clones.

That’s why, later, as we gazed out to sea, watching the Nina, Pinta, and Santa Maria (or the Aran Islands as they’re known locally) sail beyond the horizon, we were thinking of our own new worlds.

And yet, even as we gazed, another old enemy was hoving into view. Driving back east on Sunday, I felt a hitherto unsuspected sympathy for Winston Churchill as the sea views subsided and the dreary steeples of Fermanagh and Tyrone – especially Tyrone – loomed again. If it’s not Kerry treading on our dreams, it’s usually them. But even if our All Ireland chances sail over the edge of the world this weekend, we’ll probably recover within a few months. Then we’ll live in hope once more.

As the last 30 years have taught us, the condition is incurable.

Leinster made to work hard to maintain 100 per cent record 01:13
Corofin and Ballyhale frank their greatness at headquarters 01:03
Minella Till Dawn favourite to bridge long Thyestes gap for JP McManus 01:00
Sibling rivalry driving younger Ulster Burns to aim for next level 01:00
Future of Tote Ireland set to be decided by end of March 01:00
Crossword Get access to over 6,000 interactive crosswords