Tyrone brush Armagh aside with minimum of fuss 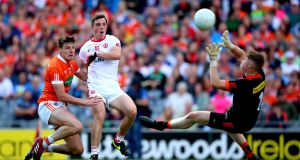 Tyrone are coming; anyone can see it.

They gave Armagh a waterboarding for the ages on Saturday night – the 18 points they had to spare wasn’t quite a record margin but it was their biggest win over the crowd next door in nearly 80 years. They went 1-5 to 0-0 ahead after 15 minutes and were blissfully unperturbed from there to the end.

This was a non-match, a fixture typed up in invisible ink. Tyrone made it so Armagh had no say in the matter. From the minute Peter Harte slid home his penalty on the quarter-hour, the margin was never anything under six.

By the second half they were competing against themselves, in which context David Mulgrew’s 2-1 off the bench will surely have a say the next day.

So they’re coming, yes. The question now is where they’re going. Dublin await in the semi-final and already the temptation is to Don King the whole deal to within an inch of its life. Styles make fights, and all that. The Donnybrook in Ballybough. All in for The Poker in Croker.

We’ll see. Tyrone can only do what’s asked of them but there must be a small alarm sounding in the back of their heads that what’s been asked of them so far is nothing like what’s going to face them in three weeks. They’ve beaten four Ulster teams to get here, which is nowhere near the boast it once was.

Moreover, Tyrone’s recent record against teams from outside their own province is woeful. Since 2009, Tyrone have played eight non-Ulster Division One teams in championship. They’ve lost seven of those games and won one – against Kildare in a round two qualifier in 2013.

They haven’t beaten Dublin, Kerry or Mayo in championship since 2008, a summer in which they had to beat all three of them. Their record since has been miserable against that trio – played them each twice, lost to them each twice.

All of which is to say that the semi-final represents a fairly definitive line in the sand for Tyrone. On the upside, it’s a long time since they’ve been so well-equipped to cross it. They are a constructed out of steel and their moving parts click so automatically into place as to make them look German-engineered at times. Armagh tried to ape their set-up and style here and ended up looking fathoms out of their depth.

“Coming here, we were probably up against the best defensive unit in the country,” said Kieran McGeeney afterwards.

“They showed that. It shouldn’t have taken them by surprise but we struggled to deal with it. It’s a mixed bag, so it is.

“In fairness, every team that faced Tyrone before this found that [defensive shape] hard to deal with as well. You have to be able to move the ball quick and commit more than ones and twos to attack. That’s why some of our better forwards were easily suffocated, because they didn’t have those runners off the shoulder. They showed glimpses of it for 20 minutes in the second half but they had chances and they didn’t take them. And if there’s nothing to fight for, then they just lose heart.”

That is Tyrone’s aim every time they go out. Like Donegal in 2012, they look to break your mind as much as your body. It has worked well against Ulster sides but then this has been a far from vintage summer for teams from the north.

Seven of the other eight counties from the province have taken a hammering in this championship, ie losing by eight points or more. It hardly needs committing to print that Dublin will not lose heart.

Tyrone led 1-8 to 0-4 at half-time and never let up thereafter. Mark Bradley flashed through the early part of the game, Niall Sludden was a rampaging menace throughout and the substitute Mulgrew took his brace with aplomb. But they were never tested and Mickey Harte made no bones about their superiority afterwards.

“I thought we should have been good enough to have the sort of score difference we had through the rest of Ulster because I felt we were in a better place than Armagh were. They were a side that had done very well after losing the first round and they gained a bit of momentum.

The hill gets so much steeper now. Time to find out if freewheeling over the bumps and drumlins of the north has been adequate preparation.