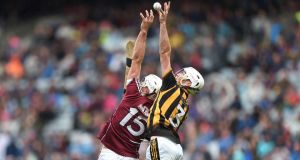 Galway’s Jack Canning and Michael Carey of Kilkenny challenge for the sliotar during the All-Ireland MHC semi-final at Croke Park. Photograph: Tommy Grealy/Inpho

Supersub Fahy struck in the third minute of additional time to settle a tie that had been level three times in the final quarter and ensure a final presence for Galway in this grade for the second time in three years.

While Fahy was the scoring hero, the man-of-the-match award went to Galway skipper Darren Morrissey, who did a brilliant man-marking job on Kilkenny skipper and dangerman Adrian Mullen.

Galway also survived an awful call with four minutes left, when the umpire at the Hill 16 end handed Kilkenny a ’65 after Evan Cody had clearly knocked the ball wide.

Mullen converted and Kilkenny were a point ahead – 2-8 to 1-10 – with time running out.

But Galway had late answers, Donal Mannion levelling it up before Kilkenny suffered a real blow when Conor Heary was sent off for a second bookable offence.

And the young Tribesmen had the wherewithal to carve out a winner, as Fahy kept his nerve to slot over the decisive score.

Kilkenny had led by 1-6 to 0-6 at half-time as Jim Ryan’s third-minute goal separated the sides.

Mullen went close to a Kilkenny goal eight minutes before the break but Galway goalkeeper Darach Fahy did well to keep out the Ballyhale youngster.

A generally disappointing first half was followed by a better second period, as weather conditions improved slightly.

Kilkenny’s second goal – scored by Cody in the 37th minute – had Kilkenny 2-6 to 0-8 clear but Galway hit back through Canning’s 39th-minute penalty, after Mannion was taken down.

Seán Bleahane, impressive in the second half for Galway, levelled the tie at 1-9 to 2-6 and while Kilkenny moved ahead twice more, the Westerners held their nerve and moved into next month’s decider.