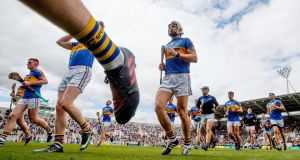 Brendan Maher and his Tipperary team-mates will put their All-Ireland title on the line against Galway at Croke Park. Photgraph: James Crombie/Inpho

It was a tribute to the triumph of hope over experience in Tipperary. Having failed since 1965 to string together even two All-Irelands, some in the county acclaimed the 2010 defeat of Kilkenny’s five-in-a-row ambitions by declaring the outset of their own Drive for Five.

That this didn’t get any farther than the Run for One confirmed what has remained a long-running sequence.

No-one would describe retaining an All-Ireland as an easy task but it has been done 14 times since Tipperary last brought the trophy up to Dublin and back again in the one weekend so there’s no obvious explanation for why the county has found it so much more difficult than others.

Brendan Cummins, a rare example in recent years of a Tipp double All-Ireland medallist, did note in his autobiography Standing My Ground that he had become irritated by the fast diffusing focus after that title seven years ago – an achievement, which paired with a thumping under-21 All-Ireland win, appeared to hold out genuine hope for a new era – on the weekend of a league match.

“When standards begin to slip, it’s a bit like the first rust on a piece of metal. If left unchecked, the rust grows and eventually the metal is unfit for purpose. I was always a stickler for time-keeping; I hated it when players turned up late for training or team meetings.

“At the team hotel on the afternoon of the Dublin game, our pre-match briefing was due to start at 2.30 pm. I know because I wrote it down. I arrived into the room at 2.29 and just a handful of players were present, along with team management. The meeting got under way at 2.37 and, after studying some video footage Declan spoke about the importance of the game …”

Declan Ryan had taken over as manager from Liam Sheedy’s All-Ireland winning administration and the difficulties of such a changeover were volunteered as a factor in the inability to retain the title. Then again …

In football the achievement has become generally rare with just Dublin last year and Kerry in 2007 managing back-to-back titles in more than quarter of a century. In Kerry’s case this was achieved under the different managements of Jack O’Connor and Pat O’Shea and this variety has been cited as an advantage in getting a champion team out of its comfort zone.

But this problem didn’t start in 2011. Previously there was 2002. Tipperary, recovered after the shock of losing the Munster final to Waterford, ran Brian Cody’s Kilkenny close but lost by four points to conclude another year in which Tipp didn’t quite manage to put All-Irelands back to back.

The team was coping that year with the emergence of Waterford in Munster and the rise of Kilkenny so being unable to retain their title wasn’t a mark of dishonour but the county would have been dismayed to learn that they would have to wait another six years for a provincial title and a further two to reclaim the All-Ireland.

The Tipperary hurling experience has been of bridging long barren periods and moving on without creating more of an impact. During the past five decades only Babs Keating sent out the same team to win more than a single All-Ireland, in 1989 and ’91 and even they believe they could have won more.

Those wins were respectively the first in 18 years and the last for another 10.

This weekend in Croke Park the county is back, two matches away from successfully defending the All-Ireland hurling title for the first time since 5th September 1965, a day they stretched farther ahead at the top of the roll of honour with 21 championships.

From a vantage point of such prosperity the hardships of the subsequent 52 years – and counting – would have been unthinkable. Just six Liam MacCarthy Cups have been added and the county has slipped to a distinct third place on the winners’ list.

Perhaps there’s a clue in the fact that of the 13 back-to-back successes since 1965, Cork and Kilkenny account for all but one of them (Galway, the remaining instance).

When counties win multiple All-Ireland titles there’s a greater statistical likelihood of putting two of them together but it also means that when the Liam MacCarthy does come back along the road it’s not treated like an apparition.

As a young wing back on that 2001 team, Eamonn Corcoran looks back on his playing days with fond memories of the success but regret at the failure to follow through during the remainder of his career.

“When Nicky [English] took over (in 1998) we hadn’t won an All-Ireland since 1991. By the time we did it was 10 years after that. Depending on the age group of the players, a team can get carried away by winning. For months afterwards you’re bringing the cup around and getting pats on the back when you should be trying to settle back into training and regaining your focus.

“There’s a temptation to believe, ‘Well, that wasn’t too hard in the end. We can go up and do this again.’”

That year, 2002, was also a new beginning in the championship with the roll-out of a qualifier system similar to the one successfully trialled in football a year previously but Corcoran says that whatever the competition structures, defeat still leaves a scar.

“We got caught by Waterford in the Munster final and came within a puck of the ball against Kilkenny right up to the end but we had problems from the word go that year compared to 2001 when we won the Waterford Crystal, the national league, we won the Munster and the All-Ireland. Once you lose, doubt sets in, which doesn’t help.

“The Tipperary public were delighted to win in 2001 and we – players and supporters – were nearly happy enough. Will we win one again? If we do, great but if we don’t it’s not the end of the world. We have our medals.”

That feeling of wellbeing has been natural in a county whose recent MacCarthy Cups have arrived after gaps of six, nine and 10 years respectively. There is literally no experience in Tipperary of maintaining focus for a sufficient length of time to maintain status as the best team in the country.

If there is a collective satisfaction in a county after All-Ireland victories, Corcoran believes the personal impact can also undermine the efforts to ensure the sequence doesn’t stop at one.

“There are fine margins for individuals as well as teams. I know myself that I would have looked after myself completely differently the year after winning the All-Ireland. A week or two after the celebration I would have put my head back down and said to myself, ‘I’m going to win another one’ and make sure that I was playing to the best of my ability.

“You can get soft and think that you’re better than you are and mightn’t be putting in the extra work you did before. In fairness to Nicky he was very aware of that at the time and tried to change things up in training. He knew if we did the same things we’d done in 2001 it wouldn’t be enough.

“On holiday we did a few training sessions even though as players we were thinking it was supposed to be a break but the year before we’d probably have trained the whole time we were away. I could have looked after myself a little better but I’m looking back. Back then I was 22.”

He believes the attitude of the current team has been markedly different despite its spiral into decline in April and May, losing both league final (by a street) against Galway and the Munster first round tie with Cork.

“When we won last year it was all about two in a row, from management and players, compared to 2010. All I was hearing for a week after the All-Ireland last September was that the players are getting focused on next year so I was surprised to see the fall-off in the league final because as far as I know, as soon as the All-Ireland was over they got in a huddle and said, ‘we’re coming straight back here’.

It’s more than 50 years since anyone did.