GAA president John Horan made the announcement at annual congress 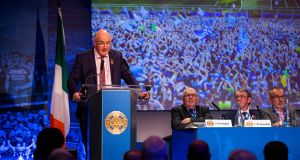 In Saturday’s address to the GAA’s annual congress in Croke Park, association president John Horan announced that the new Tier 2 football championship will be officially named the Tailteann Cup after the ancient Celtic sports festival.

“In ancient Ireland,” said Horan, “our athletic and sporting prowess was celebrated every summer by the staging of the Tailteann Games, a festival that some scholars date as far back as 1600 BC.

“A recent meeting of Árd Chomhairle has agreed to dedicate a new trophy for the Tier 2 senior football championship to be called the Tailteann Cup – a name that honours this link to Ireland’s sporting heritage and crowns modern day sporting heroes in one of our native games.”

The games were also commemorated in the 1920s when the GAA organised the modern Tailteann Games, an international athletics event, which was optimistically seen as a Gaelic Olympics. It only lasted however for two further events, in 1928 and 1932.

The project did lead to the first infrastructural grant from the new Irish state to the association when £10,000 was given towards the construction of the original Hogan Stand in time for the first staging of the games in 1924.

Horan also spoke in support of the tiered championship, which has attracted a mixed response since its introduction last October.

“This competition came out of a desire from several counties to have a championship that was inclusive and not exclusive.

“Far from being a radical new departure, it follows a tiered path that is well known in inter-county championship hurling, at club championship level, schools’ level and across our sister organisations where it has proven itself to be effective.

“Yet, for all of that, it still does not deny a county a chance at aiming for the Sam Maguire Cup if they are good enough.”

1 America at Large: Golfers guilty of legitimising Trump’s toxic regime
2 ‘This is not a personality contest’ - Jack Nicklaus endorses Donald Trump
3 Solskjær’s stock is on the rise again after clever squad rotation
4 Ireland, France or England? Who needs what to win the 2020 Six Nations
5 Sonia O’Sullivan: Nothing normal about days spent under strict hotel quarantine
Real news has value SUBSCRIBE

‘This is not a personality contest’ - Jack Nicklaus endorses Donald Trump 10:10
Bartomeu bows out with European super league bombshell 09:25
Solskjær’s stock is on the rise again after clever squad rotation 08:58
Dundalk ready to take on Arsenal; Tyrone facing Conor McKenna dilemma 07:22
Ireland, France or England? Who needs what to win the 2020 Six Nations 07:00
Crossword Get access to over 6,000 interactive crosswords