Dublin may be on the road for All-Ireland quarter-finals 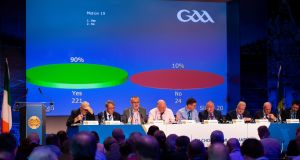 Dublin may be required to go back on the road should they reach this year’s All-Ireland quarter-final round robin.

Up until now the county played both their home match and what has been designated as ‘the Croke Park round’ – the double bill meeting between provincial champions and also the qualifier teams, which has been played to date at the headquarters venue.

Congress on Saturday voted – with Dublin supporting – by 221-24 to re-designate the latter as a ‘neutral venue,’ clearing the way for the Central Competitions Control Committee to fix phase 1 matches accordingly.

For instance were Dublin again to win Leinster, their phase 1 match against the Munster champions – strongly fancied to be Kerry – could conceivably be fixed for Thurles where the counties played in the 2001 All-Ireland quarter-final and replay.

Paul Cunnane, Mayo’s PRO, welcomed the proposal as something that “would reduce costs to counties” as well benefit local economies in the neutral venues chosen.

Michael McGrath, chair of Donegal, who proposed last year’s motion that any county in the All-Ireland quarter-final round robin could not nominate Croke Park as a home venue, which was defeated nearly 2:1 by delegates, supported on Saturday saying that it brought “more fairness” to the quarter-finals.

It is though simply an enabling motion and the CCCC is not obliged to exclude Dublin from Croke Park, should they decide that it is the most appropriate venue. Kerry or whoever the Munster champions may be may prefer to face Dublin where they have played them in many high-profile matches during the last decade, including three All-Ireland finals and one replay as well as two semi-finals and two league finals.