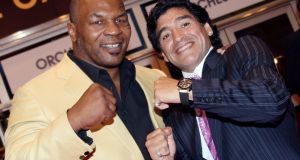 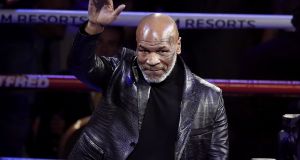 Mike Tyson pictured back in February at the WBC World Heavyweight Championship title fight between Deontay Wilder and Tyson Fury at the Garden Arena in Las Vegas. Photograph: Etienne Laurent/EPA

When Mike Tyson appeared on Good Morning America this week to promote his return to the boxing ring at the age of 54, the significance of the word on his sweatshirt almost obscured what he had to say. It simply read: Brownsville. And it spoke multitudes.

His Brownsville will always be the ravaged east Brooklyn 1980s wasteland whose streets fuelled Tyson’s nihilism and paranoia and was the source of his suspicion and alertness even as his preternatural ferocity and athletic strength catapulted him into the glare of the world’s fascination.

At last it has become a place he can salute. From the safe distance of his mid-50s he can wear Brownsville as a badge of honour. He wore a different top with the same slogan on a CBS interview and looked pared and content as he said all the right things and completed what must go down as one of the least likely redemption stories in American sporting life.

This weekend, Tyson will step into the ring to fight against Roy Jones Jnr. It brings together two of the most explosive and compelling fighting talents of the post-Ali era for what is essentially an exercise in nostalgia. The eight rounds will be two minutes each. There will be no judges and therefore no winner. If either man is cut, the fight will be ended. And knockouts are precluded: given the records of both boxers, it’s hard to see they can be sure of preventing that besides lowering the dial on their punches.

Iron Mike is in the shape of his post-boxing life, hopping up on the treadmill for two-hour slogs to drop his body weight by almost a third and having his promotions team posting, throughout the pandemic drear, a series of tantalising social posts of the iconic style: the pit-bull stance, the balletic feet and almond shaped glint and grimace as his face appears after one of those ferocious hooks, as though from behind a curtain. The body is chunkier, of course and the greybeard he rocked until this week was a salient reminder of just how long Tyson has been bobbing around on the flotsam of fame and notoriety.

And when you see him this week it feels like a minor miracle that he has made it through. Even the condensed history of the macro episodes in Tyson’s life – 38 arrests before he was even a teenager, world heavyweight champion at 20, convicted of rape at the age of 29, jailed and a pariah, portrayed then as a walking freak show in the years afterwards and enthusiastically giving that role oxygen, now reciting Wilde’s Ballad of Reading Gaol, now chomping on the ear of Evander Holyfield, getting older, retiring on his chair with an exhausted wave of resignation against big Kevin McBride in 2005 . . . washed up, done but somehow not finished . . . reveling in a cameo in the global Hollywood comedy The Hangover, unleashing his dramatis personae in the series of one man monologues, suffering a terrible family tragedy and emerging in the social media age as a savvy entrepreneur of a budding cannabis empire to reach this point, where he is kind of cheating time by allowing a new generation of sports fans to at least get a theatrical sense of the dark energy his fights created: he sure made it out of Brownsville.

After the news of Diego Maradona’s death flashed around the world on Wednesday, a photograph popped up on Tyson’s home page. The boxer is carrying the football genius in the traditional bride-across-the-threshold pose during Maradona’s time as TV host. Both men are well past their sporting prime and their faces informed with a kind of wildness and anarchy and a shared recognition of where they had travelled in their respective sports. They inspired different responses from their public: while Maradona always generated an international warmth and admiration, fear and fascination were Tyson’s traditional calling cards.

And even now, the sense of his life as a bleak adventure is never far from Tyson’s conversational turns. After becoming fascinated by boxing history through his coach and saviour Cus D’Amato, the figure whom Tyson saw a kindred spirit was Sonny Liston. In 2000, when Tyson a pariah, portrayed as scarcely human, Nick Tosches’s book Night Train was published, a terse, cinematic account of maybe the least loved champion in boxing history.

“I think now that my boyhood fascination with Sonny Liston had to do with his being as feared and hated by blacks as by whites,” Tosches writes early on.

“He was the ultimate outlaw. Man, those narrow-lapelled sharkskin suits the felling left and that slaughterhouse right and that scowl: it transcended race.’

Tyson did his best to run with that concept, reveling into Baddest Man On the Planet slogan until it ate him up and left him with nowhere to turn. And in the last years of his boxing life, he seemed likely to go down the same path as his anti-hero.

And yet here he is, just this week, welcomed again on the couches of America’s family friendly television shows: a man rehabilitated and invited to reflect on the lessons learned of the experiences that have shaped him. And he has always been a fast study, Tyson, with an uncanny ability to remain just in front of social trends when he spoke of his favourite subject – himself – and his mission to attain humility, to shed the ego, to remain present in the moment: the kind of pseudo-psychological fizz that has spawned a small army of by-the-hour gurus. Mike Tyson 2020 is not the fighter of 35 years ago.

But then there is this Thanksgiving Day photo from Thursday where Mike is at home in full tuxedo standing in front of an edible concoction made in the image of Roy Jones’s face and head. He is ready to carve. “I like ears,” he tells his family. “What would you like?” The clip cuts to Tyson munching happily on an edible ear as he says that it tastes better than Evander’s.

Of course, it’s just a promotional lark. But the dark manic twinkle is there in the eyes. And it leaves you wondering always just who is really behind there.