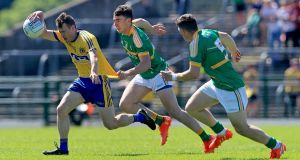 Such is the unbearable lightness of being Leitrim , this can only qualify as another moral defeat. Because victory was never an option, the game was decided by a simple combination of Roscommon’s natural superiority and Leitrim’s equally natural limitations.

Roscommon carved them up with two goals inside the first half, both scored by Conor Devaney, then offered them up like lambs to slaughter – or rather roasting given the day that was in it.

It was their seventh successive championship win over Leitrim, the distance in the end of 17 points also a record championship margin for their once near rivals at Dr Hyde Park. Last year the margin was 13. You do the math.

Roscommon finished this Connacht senior football semi-final with 10 different scorers, including three points from man-of-the-match Enda Smith, who stood out like a monument at midfield.

Indeed, that superiority showed in every sector of the field, the game ending with many in the 8,844 in attendance making their solemn exit well before the end, knowing full well there was nothing more to see.

Roscommon have this strange history of playing some of their best football when confidence is low; relegation from Division One had knocked that back a bit. The easy victory over Leitrim might just prove the timely refill ahead of the Connacht final showdown against Galway on July 9th.

Manager Kevin McStay was openly ruthless in his assessment of the game, admitting all he cared about was Roscommon – and it certainly wasn’t up to him to offer any solutions for his opposition.

“Well, we’re in the final, and we needed to get that ticket to the final. Unfortunately it bears no resemblance to what we’re going to face against Galway. For all intents and purposes, the Connacht final in many eyes was last week.

“But at the same time it’s one of the big targets that the team set ourselves, to see if we can improve on last year’s performance which wasn’t really good enough in the end.

“We have to build on it, take the positives and look at it. Some of the scores were near the level they need to be at, the pressure ones weren’t really what we’ll experience in three weeks’ time.”

Ciaran Murtagh and Diarmuid Murtagh still provide the main scoring threat close to goal, Donal Smith starting well with one point before ending his game after 13 minutes, black-carded for a silly foul on Michael McWeeney.

Roscommon were already 10 points down the road at half time, 2-9 to 1-2, with little need to press on the accelerator from there until the finish. Devaney bagged his two goals in the opening half, the first on 15 minutes, deftly buried on the rebound after Smith’s close-range was well saved by Brendan Flynn; Devaney’s second, on 33 minutes, was near effortless, Diarmuid Murtagh the provider after a gentle waltz around the Leitrim defence.

Roscommon came out after the break, and were once more quicker to the turnover, the interception, the loose ball. Leitrim lost midfielder Damien Moran to a black card just before the break, then McWeeney, for a foul close to goal on Brian Stack. Ciaran Murtagh took the penalty and it skimmed off the crossbar for a point. Probably just as well.

Leitrim managed one moment of hope after seven minutes – with their first attack of the game Darragh Rooney finishing off neatly into the top left of the Roscommon goal. They only added two points in the next half hour.

Afterwards, Brendan Guckian, the Leitrim manager, stood outside his dressing room with the stopwatch around his neck still running. “Yeah, very disappointed,” he said. “What we were looking for today was a performance, and we didn’t get that. Especially not in the first half.

“I spoke before about Division One playing Division Four, and that was the difference. Roscommon brought a lot more intensity to the game, and I’m just disappointed for our lads, who put in a huge amount of work, and didn’t justify that today.

“And these lads work as hard as anyone else, but just didn’t show that today. There’s no doubt they make the same sacrifices, same effort. We have to try to remain positive, keep dusting ourselves down, but there were times we just weren’t able to compete when Roscommon went at us. Physically they look in great shape, and the goals definitely killed us in the first half. It’s very hard to bounce back after a start like that. We’ll just try to pick some of the positives.”

Most of what else McStay had to say was about Galway, and what exactly Roscommon will need to do to challenge them.

“Galway are going to play a very close and compact blanket, I’d imagine. So we’re going to have to shoot from range, and get those scores that we need to get.

“I thought there were some good performances by the younger players; they have really bedded themselves in. If they can grow from this, and that’s the big challenge, can you grow from what you did today with another 30 or 40 per cent for the next day.

“We have three weeks, and we have it well mapped out. We have planned obviously beyond Leitrim, any team manager has to do that. Every day is accounted for and it needs to be. This is the challenge of our lives going up to Pearse Stadium to play Galway. So, we’re into that final, in comfortable enough circumstances, but unfortunately it bears no resemblance to what’s ahead of us.

“We’re going to go to Galway to make amends for some of the stuff that we did previously up there, which wasn’t acceptable.

“It’s a long long time since Roscommon have taken out one of those two big teams Mayo or Galway. We have a good chance, we have a young team and they are going to be learning all the time. We want to be super, super competitive in that final.”