Galway shoot the lights out in destruction of Offaly 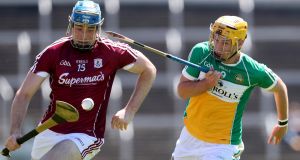 Galway manager Micheal Donoghue said he was pleased with the way his side adapted to Offaly’s defensive tactics and moved a step closer to their second Leinster crown with victory at O’Moore Park in Portlaoise.

Kinvara clubman Conor Whelan scored seven points from play, while Joe Canning also had seven points in his personal tally as Galway picked off Offaly with a comprehensive team effort.

Galway beat Offaly 2-19 to 2-9 in last year’s semi-final and despite Oisin Kelly’s early goal, Offaly were always going to struggle to keep the deficit below double figures again.

They came into this game on the back of a last-ditch victory over Westmeath but Galway had a huge win over Dublin in the previous round, following on from their league final success against Tipperary.

And after leading 0-16 to 1-6 at half-time, Galway dealt with the two Offaly sweepers - midfielders Paddy Murphy and Shane Kinsella - to reach another Leinster final.

“Coming down we thought that Offaly might set up with a sweeper and then they set up with two in the first-half,” said Donoghue. “Testament to our boys, they adjusted themselves and often had to go shooting from distance. They took the scores when they presented themselves.”

Galway played with the breeze in the first-half, but it was Offaly who took a shock lead when Belmont forward Kelly held off the challenge of John Hanbury before shooting beyond Colm Callanan in the Galway goal.

It was an ideal start, but after that fourth minute effort Galway began to deal with the sweepers and Offaly were unable to get a foothold up front.

Shane Dooley was their one shining light and he finished the opening 35 minutes with six points.

But Galway were too strong and hit nine points from play by the 20th minute before Joe Canning tapped over a free.

The only downside was the injury to former All Star Cathal Mannion, who limped off with an injury to his left ankle after a collision with Sean Ryan.

Galway didn’t let that affect their overall display and they continued to pile on the pressure before the break, with Canning exemplary from the placed-ball - he scored five points in the first-half.

As Offaly chased the game in the second-half they had to move away from the two-sweeper system. It cost them dear and the Galway forwards have acres of space to roam into as substitute Shane Maloney and Niall Burke wrought havoc.

But Whelan was the stand-out, and his two points after half-time put the game out of reach. Dooley continued to fight his lonely battle but there was very little support.

Galway could have had a goal in the 60th minute, but Maloney’s low shot was saved well by James Dempsey.

Donoghue emptied his bench and the younger players came on to make an impact as Galway continue to formulate a squad which will challenge in the latter stages of the championship.

“We created two or three good goal chances on top of the one we got. And our set-up and our game-plan, as such, was working,” said Offaly manager Kevin Ryan. “We could have easily have found ourselves level or even a point up at half-time so there were definitely positives in the first-half.

“I definitely thought five minutes into the second-half, it was over and the scoreline reflected that in the end and the body language changed. But again, it’s a learning curve and Galway are in the top two or three in the country. Wherever we are, we know where we are and it is about getting better as we go forward.

“We will re-group as any team will, look at the draw and we will take the positives and whatever else and we have a qualifier in two weeks’ time and we are looking forward to that, as much as anyone else.”