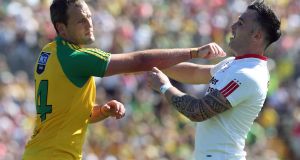 It is positively telling the number of times Michael Murphy uses the word “pace” in the course of this short, grouped interview: especially as he’s talking about Donegal’s Ulster football semi-final against Tyrone on Sunday.

“Aye, that’s way football is going, all surrounded by pace,” says the Donegal captain “If you look at the leading contenders – the likes of Dublin, Kerry, Mayo and Tyrone – they all have pacy footballers. Players that can actually play football, as well as having that pace.

“I suppose that’s something that Rory Gallagher pin-pointed coming off the back of the last few years. No disrespect to the older lads that have gone, but we needed new legs and freshness there. The younger lads have given that pace to us.”

So much for “size”, or “strength”, or the “heavyweight contest” that typically defined the meeting of these two teams: it may not be that Sunday’s game will go to the swiftest rather than the strongest, but it might be the best way to bet.

Murphy himself looks to have gathered some pace this season – perhaps not deliberately slimmed down, but a slightly lighter, more aerodynamic model compared to previous years.

It’s in fitting with the 171DL team, new players such as Eoghan Bán Gallagher, Jason McGee, Michael Carroll and Jamie Brennan cut from leaner cloth, especially when compared to some of the players they replaced: Colm McFadden, Eamon McGee, and Neil Gallagher.

In recent years, championship meetings between these two teams have been decided by brute force, more than anything else. Tyrone won last year’s Ulster final by just two points, and their first round meeting in 2015 was particularly robust, Donegal winning by three points, Seán Cavanagh famously pulling up his jersey the following day to reveal a series of souvenir scars.

They look evenly matched again in every sense, including pace. Tyrone walked all over their once great rivalry with Derry with a double-score victory, while Donegal come to Clones on Sunday still fresh from their 16-point trimming of Antrim.

“The games do tend to be sore,” says Murphy. “There is so much familiarity between the two teams, you know every one of their players, their dangers, both teams know each other, and both managers know each other too.

“Yes we got beat last year, but we did quite a lot right that day, people tend to forget about that. But we came up short. Tyrone were the better team, but there is a bit of hurt there and we need to try put it right. You can chat and chat and chat all day about it but we know what we want to bring to the game.”

“We’ve always been fairly okay at trying to keep them out at the other end, but we just struggle to rack up scores. I suppose the whole idea of Rory bringing in this batch of new players, and so far the signs have been fairly decent, is that we can put up a few scores. It’s something, as Donegal teams, that has been levelled at us quite a bit, in terms of lacking scoring power and lacking putting up scores.”

Murphy helped himself to 0-6 against Antrim, including one ginormous point from play, and now looks settled at midfield, despite the different responsibilities that come with it.

“It just seems to be a bit more pinned down this year alright, throughout the whole league that’s the kind of role Rory has given me or sees me playing. That’s what I’ve tried to do,  and there hasn’t been too many stints up top. Out around the middle seems to be where it’s at – I suppose there is loads of things to be done out there and you’re never off.

“The roles are quite different in what they play. You have to be a hell of a lot more patient, in the full forward line, to wait on things to happen. Whereas I suppose out the field you can maybe go after things a wee bit more.

“But looking over the last number of games we’ve played against Tyrone, league and championship, they have always been very well organised defensively. We got to see them against Derry, and although it’s going to be a different game, again they are bringing serious pace and threats from all over the pitch so that’s what we are going to have to bring our own game to it.”