Clare not hiding importance of setting record straight in Munster 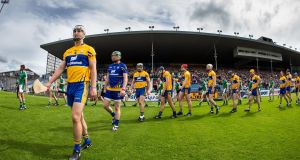 There was far more pressure on Clare than on Limerick in Sunday’s Munster semi-final.

After three seasons of misfiring since the All-Ireland victory in 2013 players knew that with the change in management, they would be out of alibis if yet again they were to exit the provincial championship at the first time of asking.

Poor displays and results didn’t start with defending the All-Ireland in the past couple of years. Since the great team of the 1990s reached their last Munster final in 1999 Clare have only qualified for two such occasions – 2008 and this year.

Since winning the All-Ireland however there has been less of an excuse and both players and management knew it, which was obvious from the reaction in the Thurles aftermath.

“At the start of the year,” according to corner back Séadna Morey, a veteran of the three-in-a-row All-Ireland wining under-21 teams of 2012-14, “we aimed to get to a Munster final.

“That was the aim for this whole year. We haven’t been there in I don’t know how long, all those players in that dressing-room wanted just to get to a Munster final. The main thing was to get over that line and we have done it now.”

One of the team’s joint-managers, Donal Moloney who with Gerry O’Connor piloted the under-21 successes, endorsed that view.

“Yeah this is massive pressure, massive. This is the best group of players we’ve had in a generation. It’s a privilege to work with them but also there are very high expectations. We definitely felt it but we were trying to shield the players as much as possible. They definitely felt it. There was no other result today other than getting to a Munster final.”

Podge Collins was a Hurler of the Year nominee in 2013, he now has his sights set on provincial silverware, and he echoed the sentiments of his manager.

“Definitely. The last few years have been disappointing, very demoralising after winning an All-Ireland and not to be winning games in Munster. I know how competitive Munster is and I know on any given day any of the five teams could beat each other really, but it was coming a long time.

“We needed to get a win and we’re delighted now we got that win and fortunately enough it was in a Munster semi-final and now we’re in a final.”

Given the youth of the Clare panel it’s no surprise that none of the team that played in the 2008 final are still involved.

Morey believes that the staccato nature of the Limerick match will stand to the team and that their composure in withstanding the Treaty county’s comeback in the second quarter augurs well for the rest of the championship.

“We wanted to start well, which we did. Those two goals really got the team going but when Limerick came back at us and got those eight points, I think it was a learning curve for us and we came back again, which shows that we are learning from our mistakes and getting a bit of consistency into it.

“We didn’t panic or we didn’t crumble or anything like that. When they got that momentum against us, we settled and just got one or two points to keep the scoreboard ticking over, which was a good sign.”

Collins is however more aware of the pitfalls, if they do not quickly learn from their mistakes.

“Switching off for 10 or 15 minutes is not good enough and it won’t do. It’s something we’re going to work on and hopefully will rectify for the next day. I suppose it just gives us a bit of time to work on the mistakes we made today.

“It’s two weeks to the Cork-Waterford game. It’s going to be a few [three] weeks on from that. We won’t feel it come around. The summer flies, it’s going to be coming fast.”

The next day pits Clare against either surprise contenders Cork, who beat the All-Ireland champions Tipperary, or Waterford who have been the second team in the province over the past two seasons.

It’s nearly 20 years since Clare played either of those counties in a Munster final. Controversially against Waterford in 1998, when it went to a replay that triggered a disciplinary firestorm, and a year later when Jimmy Barry-Murphy’s young team came from virtually nowhere to win both Munster and the All-Ireland.

Despite their 2013 success, Moloney believes that it will suit the team better to target an All-Ireland through the provincial winning route.

“I know the qualifiers served Clare well four years ago but the team was probably very much in the early stages of development at that time.

“That brilliant nine-week run back in 2013: they gained massive momentum through the qualifiers. But this time around, where the team is at, going through the front door is really important for us.”