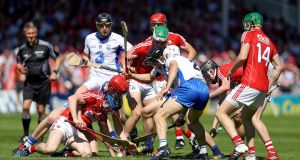 So, a Cork-Clare Munster final - that’s what we all predicted, right? Kieran Kingston’s young side must feel like they’re going to have to win the All-Ireland before people take them seriously. They had altogether too much energy and skill here for a Waterford team that looked leaden - take your pick as to whether that was despite or because of their three-month lay-off.

Regardless, Cork put them away with relative ease in front of 33,163 paying guests in Thurles. Though it felt at times the teams were giving us a far better game than the baking sun should have allowed, Cork always looked the team most likely. Only Jamie Barron and Stephen O’Keefe could go home feeling they’d done their bit for Waterford - you won’t win much when only your goalkeeper and midfielder stand up for themselves.

On a day like this, you applaud a man for venturing out of the shade, never mind chancing the exertion of activity. Temperatures down on the pitch would have made a cabana boy puff his cheeks and make sure to keep the change. In that context, it was a wonder the players were able to lift their sticks by the end.

Not alone did they manage that, they put together a fairly compelling afternoon. Cork came with a reasonable facsimile of their display against Tipperary - maybe not as clinical but certainly infused with the same vim and gusto. Mark Coleman continued to look to the manor born at wing-back, always a dependable conduit for Anthony Nash’s puck-outs. He sliced a sideline cut over the black spot early on for good measure.

In general, Cork were the quicker into their stride. Patrick Horgan and Seamus Harnedy knifed first-half points, Darragh Fitzgibbon and Mark Ellis landed longer-range efforts. Conor Lehane wasn’t the wizard of the Tipp game but flashed in and out to good effect as well.

As for Waterford, they looked like a team who hadn’t played a game for three months. Their main route to goal came via crossfield balls down on top of Maurice Shanahan, with the Bennett brothers looking to feast on the resultant scraps on the ground. Pauric Mahony was generally accurate from open play, yet surprisingly less so from frees. Austin Gleeson scored one mind-bending point with a pick up from the heavens after 10 minutes but was an otherwise intermittent presence.

Truth be told, Waterford were lucky enough to go in level at the break. Cork had three goal chances, one of which was flashed across goal by Horgan after 14 minutes, the other two saved by O’Keeffe in the Waterford goal. The first was an instinctive flick to parry an Alan Cadogan shot away from a tight angle.

But the second - from Harnedy a minute short of half-time - was astonishing. Harnedy had time to set himself, take a tap and pick his spot low to O’Keeffe’s right but the Waterford goalkeeper dived full length to bat it clear.

So they went in all square at 0-10 to 0-10, a scoreline that Waterford would have been much the more thankful for. They looked all set to take advantage of it soon after the restart when Shane Bennett skipped in from the right but his low shot hit the side netting. On a day when they weren’t fluid in attack, they couldn’t afford to let chances like that slide by.

Cork had so much more about them and they duly punished Waterford for their waste. Horgan was on the frees and was typically unerring. Harnedy played with his hand in the air, fetching and shooting like the leader they needed him to be. Lehane landed another from distance, Cadogan swished one of his own.

Even when Waterford did manage to squirt through for a goal, Shanahan bundling in a scrappy one on 46 minutes, it was only a brief respite for the favourites. It drew them level and nominally gave them a chance but all it led to was Cork casually shutting the door on them in the spell that followed.

Horgan, Harnedy and Michael Cahalane pushed them clear and Cork could even withstand losing corner-back Colm Spillane to a second yellow card. By the end, they were comfortable.

Waterford’s road ahead now is anything but. Tipp and Kilkenny lurk in the qualifier draw. Some big summers are in for an early finish.