Brian Cody will lead Kilkenny for a 23rd season in 2021 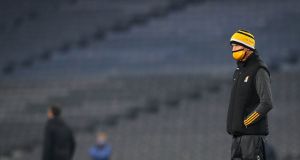 Kilkenny manager Brian Cody will take charge of the county for the 23rd season next year. Photo: Ryan Byrne/Inpho

The last thing Brian Cody will either care or fret about is the fact he’s now the longest-serving manager in the intercounty game by some considerable distance. Not when he’s spent his so far 22 seasons in charge never once looking back.

Still, last night’s news of Cody’s ratification as Kilkenny senior hurling manager through the 2021 season, his 23rd in charge, didn’t come without some sense of perhaps pending change, particularly with DJ Carey stepping aside as one of his selectors. The significant freshness that Carey was to bring to the Kilkenny set-up only lasted a year.

Cody was, as on the night of his original appointment on November 16th, 1998, the only nomination at last night’s county board meeting, and as in all recent years he wasn’t seeking anything more than a one-year extension.

The fact the Covid-19 season ran right up to Christmas – the league for now still set to resume at the end of next month – meant there was little time for any lengthy reflection for either Cody or indeed the county. Winning back the Leinster title for the first time since 2016 also proved Cody was far from finished, the 66-year-old thus bringing his trophy haul to 11 All-Irelands, 16 Leinster titles, nine National Leagues, and seven Walsh Cups, making it 43 titles in all.

Throughout the years there’s also been the sense it will always be Cody’s position for as long as he wants it, his 23rd season now equalling the reign of Seán Boylan as Meath football manager from 1983 to 2005.

The only manager who has come close to Cody since then is Mickey Harte, who ended his 18-season term as Tyrone football manager last November, following the Ulster championship defeat to Donegal.

Carey’s reason for stepping away from Cody’s backroom team after just one year has already been the source of some speculation after the five-time All-Ireland winner and nine-time All Star was contacted directly by Cody in October of 2019 asking him to come on board. At that point long-serving selector and team trainer Michael Dempsey had stepped down and Carey was brought in to freshen things up along with another former All-Ireland winner Martin Comerford, joining James McGarry, a selector since 2014. The latter two remain on as selectors, with Comerford also looking after strength and conditioning.

Carey himself is citing personal reasons, although having his son Michael on the panel, and trying to break onto the starting team, is likely another factor; any possible sense of disillusionment is also being kept firm under wraps, although Carey is now linked with the vacant position of Carlow hurling manager to succeed Colm Bonnar.

Carey previously managed IT Carlow, taking them to a first Fitzgibbon Cup final in 2017, and also guided the Kilkenny U-20s to Leinster success in 2019; indeed he’d insisted he was looking for a “break” in 2020, before Cody came calling.

Carey did speak about working alongside Cody with some considerable enthusiasm at the start of this year’s championship, back in October, also addressing the question of whether or not Cody was sometimes slow to change.

“Go back and look at lads who would train over time, and maybe the methods haven’t changed, but he’s been around a long time continuously, so has looked at the way things are changing,” said Carey.

“But it would be silly to think Kilkenny didn’t change their style of hurling, going back to 2002, 2006, Kilkenny definitely changed their style of hurling to combat how Cork played. Maybe teams see us as a little bit slow, not necessarily playing with a sweeper, or against a sweeper. So you have to go into a trend of what way the game is going, is flowing, what teams you play against. We have to adapt to that. You can’t just get the ball and hit it as far as possible.”

The only major change so far in senior hurling management for 2021 is the return of Séamas “Cheddar” Plunkett for a second spell in charge of the Laois hurlers, succeeding Eddie Brennan in the role. Brennan stepped down after two years in charge.

In football management Bernard Flynn has been appointed manager of the Meath Under-20 team with Graham Geraghty acting as a selector.