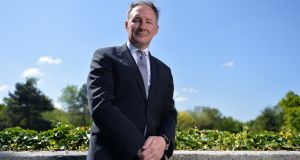 Jim Gavin at the launch of the Leinster football and hurling championships at Pearse Museum, Rathfarnham, Dublin. Photograph: Sam Barnes/Sportsfile

Dublin manager Jim Gavin didn’t need his aviation background to spot some target-rich environments when confirming to the media on Wednesday that he had agreed to remain in the position for a further two years, taking him to the end of 2019.

He was speaking in the brilliant sunshine outside the Pearse Museum in Rathfarnham where the Leinster senior football and hurling championships for 2017 were launched.

Saying that the position, which he has held for four extremely productive years, was “very enjoyable,” he added that he felt “in a very privileged position to be working with such a highly motivated team and management”.

“We have lots of challenges ahead and I understand that but I enjoy taking those challenges on.”

His views took a more astringent turn when asked about the appointment of inexperienced referees to take charge of both Dublin’s matches with Kerry in the league, especially the final, which proved to be a first defeat in over two years in league and championship for Gavin’s team and only the second after St Patrick’s Day that he has sustained in five seasons.

By way of preface he remarked that he felt Dublin, whose late comeback against Kerry in that match fell short by a point, might have been disadvantaged by one of referee Paddy Neilan’s decisions.

“Should probably have got that penalty call that wasn’t given, and probably a reflection maybe of a very good but inexperienced referee being in that cauldron and not giving it,” he remarked about the Roscommon match official, whose first Division One match all season was the final.

“Yeah, I mean, he’s an excellent referee – as was the referee we had from Tyrone [Seán Hurson –- also getting his first top-flight match of the league] down in Tralee. But you would have to certainly question the logic behind exposing a referee with that experience in those high-pressure games. I don’t think it’s fair on them.

“You certainly have to question, from Croke Park’s perspective – I can’t answer those questions. We have a lot of experienced referees out there and I think there should be a better methodology of giving our top-class up-and-coming referees exposure, not at the deep end, in the high-profile games, but in a more measured way.”

The lead-up to the league final was notable for comments made by Kerry manager Eamonn Fitzmaurice, protesting that Dublin pundits had been establishing “a narrative” about Kerry – a reference inter alia to former player Paul Curran’s view that “Kerry should be ashamed of themselves” after the league match in Tralee – but that whereas he believed Jim Gavin’s team to be “fantastic”, they also had “a hard edge”.

Gavin said that he wasn’t referring to these comments but rather media interviews that had centred on foul play by his team.

“What I was surprised with was the narrative growing in the background, that this Dublin team was a cynical team. We’re a very physical team. We play a physical contact sport – we need to keep that part of our game. That’s what makes it one of the best field sports in the world, the ability of players to tackle each other aggressively.

“But the facts demonstrate – in terms of yellow and black cards – that we’re not a cynical team. We try to play it the right way. Lee Keegan’s fantastic goal in the Ireland final series last year – if we were a cynical team he wouldn’t have got through but he did. They are the facts.”

He said that Fitzmaurice wasn’t the target of his objections.

“No, when you see referees that have refereed previous games, asked to justify decisions they gave, or didn’t give, against Dublin, that’s fine. I’ve no problem with that. But it needs to be balanced. It needs to be opened up to say, ‘what happened to the other team as well?’ It can’t be just one focus on one particular team. That’s where the narrative is coming from.

“The referees are simply answering. I’ve no problem with them talking. I think it’s good and it’s healthy that referees articulate their views because now we can learn from it, we can understand what’s actually happening and their decision making process. That’s a very positive step.

“But when it’s focused on one particular team, that’s not healthy for the sport. When you see that narrative going about the football team, are referees being influence by that narrative? I would hope not.”

He also said that whereas he had always supported the black card, he felt that as a punishment it didn’t always go far enough.

“I’d be very much an advocate of the black card, always have been. I still think it’s not punitive enough. Being able to replace a player was always a cop-out. Bringing the sin-bin in – if it can work at underage rugby, it certainly can work at senior inter-county football. There is no excuse that we didn’t bring it in.

“I think it’s too easy that teams, particularly for those professional-type fouls – that’s why it was brought in. We saw a demonstration of that in the league final.”

He was referring to a foul committed by Kerry’s Anthony Maher in the dying seconds of the league final when Dublin defender Michael Fitzsimons was pulled down on a run towards the Kerry goal. The foul took place just outside place kicker Dean Rock’s range and the free failed narrowly. Maher got a black card but was forced to leave the field for a matter of seconds.

Asked had it not been a good foul from Kerry’s point of view, as they were desperately defending a one-point lead, Gavin disagreed.

“I wouldn’t call it a good foul. It was cynical. Fitzsimons would have been through. But that’s the nature of it. I still think the rule has worked. Just once the referees are getting more consistent with it.”

He finally said that the team had no pressing injury concerns in advance of the first championship match against Carlow or Wexford on the June Bank Holiday weekend.

Jim Gavin’s complete roll of honour (as a manager):

Philips Manager of the Year