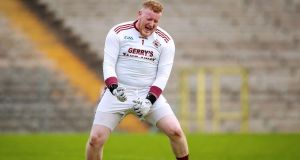 Ballybay goalkeeper Adam Counihan celebrates his side scoring a late goal in the Monaghan SFC semi-final against Inniskeen in Clones. Photograph: Tommy Dickson/Inpho

Scotstown and Ballybay will contest the final of the Monaghan senior football championship following their victories over Carrickmacross and Inniskeen respectively in the semi-finals in Clones on Sunday.

Of the two Scotstown had somewhat the easier passage after completely dominating the second half of their game against Carrickmacross. At the end of a close first half, Scotstown were ahead by the minimum margin, 0-7 to 1-3, the Carrickmacross goal by Niall Loughman.

In the second-half though, Scotstown took over, with Conor McCarthy almost unstoppable on the 40 and by the second-half water break they had opened an eight points lead and that same margin separated the sides at the finish, with Carrickmacross unable to make any inroads against a well organised Scotstown defence.

The second semi-final was in complete contrast, turning into a thrill a minute spectacular after a quiet first half after which Ballybay led by 2-6 to 0-5, both Ballybay goals coming from Patrick O’Neill.

Inniskeen were a transformed side in the second half and with Andrew Woods majestic in midfield and Donal Meegan and Seán Jones in excellent form up front as they secured extra-time, with the scores at Ballybay 3-13, Inniskeen 1-19.