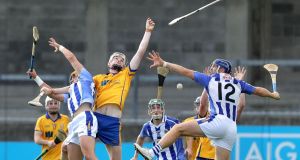 Players from Ballyboden St Enda’s and and Na Fianna compete for possession during the Dublin SFC semi-final at Parnell Park. Photograph: Bryan Keane/Inpho

It was Anthony Daly that once told Joe Fortune that when it comes to semi-finals, winning is all that matters.

Style certainly wasn’t a high priority for Fortune’s Ballyboden St Enda’s who sold off all their stocks in silk and traded in steel to secure their return to the Dublin SHC final.

Trailing by three points with 20 minutes to go, and with just eight points on the board, only four of which came from open play, they looked flat and short on inspiration.

But just like Cuala in the first semi-final, they dug deep when it counted and drew on all their big-game experience to overwhelm the underdogs down the home straight.

From the 41st minute, the Firhouse Road outfit outscored Na Fianna 1-7 to 0-1 to ensure that the champions of 2018 and 2019 will meet to contest this year’s final.

Old warriors like Conal Keaney, Simon Lambert and Paul Ryan stood up when most needed with some powerful performances, Ryan slamming home their 57th-minute goal from a penalty.

“I suppose we had to dig it out,” said Fortune. “But we’re back in a final, it’s job done. I remember at one stage Dalo saying to me, ‘There’s no good way to win a semi-final, you just have to win it’. And we’ve done that and in two weeks’ time we’ll look forward to playing Cuala.”

Ballyboden trailed by 0-8 to 0-6 at half-time and their slow start and surging finish neatly summed up a campaign that began with a heavy round one defeat to Kilmacud Crokes in July.

“On a full-back basis, we were probably torn apart that day,” recalled Fortune. “I’m just delighted because probably on day one very few people gave us a chance of getting back here again.”

It was tough on Na Fianna who put themselves in a position to secure their first ever final place but were simply unable to seize on the opportunity.

They only scored four second-half points and their last from play was Shane Barrett’s monster effort in the 37th minute.

Keaney ploughed into tackles all around the field when the game was in the melting pot and Ryan was excellent on the frees before slamming in that late penalty.