Tyrone SFC: Dungannon back in decider for the first time since 1986

Champions Trillick will provide the opposition on September 20th 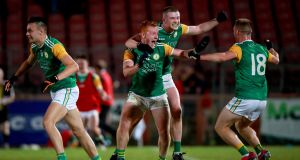 The holders made it through to another decider with a 2-13 to 1-12 win over Coalisland on a dramatic evening of semi-final action at Healy Park.

Goals from Liam Gray and Simon Garrity laid the foundation for a hard-earned success.

Plunkett Kane’s early goal gave Coalisland the edge, but Gray’s strike had Trillick ahead by 1-6 to 1-5 at the break.

Garrity had the ball in the net again inside a minute of the restart, helping St Macartan’s open out a six-points lead.

Coalisland came back to within a point, but Trillick had a strong finish in reserve, with Donnelly and Brennan nailing insurance scores late on.

Dungannon reached their first SFC decider since 1986 with a third extra-time win on the trot.

They defeated Errigal Ciarán by 0-19 to 2-12, with corner back Ciarán Barker striking the winner from a ’45.

It was 0-6 each at half-time, Odhrán Robinson’s goal gave Errigal a massive boost, before the Clarkes pegged them back, with Patrick Quinn levelling at 0-12 to 1-9.

In extra-time, Ciarán McGinley fired in a second goal for Errigal Ciarán, but they were out-scored by 0-4 to 0-0 in the second period, with Paul Donaghy bringing his tally to eight, before Barker grabbed the winner.