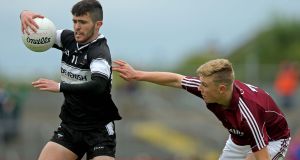 Nathan Rooney: was on target for St Mary’s in the Sligo semi-final. Photograph: Donall Farmer/Inpho

Both sides had to come from behind to win by a point in their weekend semi-finals in Markievicz Park.

The reigning champions were four down to St Mary’s heading into the final quarter, but kicked six after the second water break to run out dramatic 0-11 to 2-4 winners.

They led by 0-4 to 0-3 at half-time, with Johnny Kelly kicking two points from play, and the centre-forward also hit the first point of the second period. But two goals in quick succession pushed the Sligo town side into a deserved lead.

The first came from full-forward Nathan Rooney, who finished confidently after a good team move. Stephen Coen then netted from the penalty spot minutes later, as Aidan Rooney’s side took control.

Points from James Leonard, Liam Gaughan and Kelly again brought the gap back to one, but a fine score from Rooney raised St Mary’s hopes.

It was his last involvement though, as he was sin-binned almost straight after, and further scores from Gaughan and Kelly levelled things up, before Leonard popped up with a sensational winner in injury-time.

He fisted to the net following some great work by Paul Logan, and also fisted a point a minute later as they turned a three-point deficit into a one-point lead.

Barry O’Mahony did his best to rescue Coolera’s hopes, and hit eight of their nine scores. But Logan pointed the winner as Drumcliffe held on for a 1-7 to 0-9 victory.