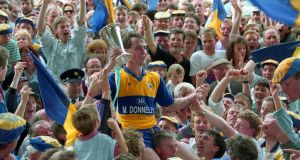 Clare captain Francis McInerney celebrates with fans after the victory over Kerry in the 1992 Munster SFC Final at the Gaelic Grounds in Limerick. Photograph: Inpho

Time mightn’t be integral to sporting shocks but it’s often a handy metric. It was 43 years since Clare had beaten Kerry in a championship match and 75 years since the county had won its only previous Munster title.

In the meantime there had been indignities, including the 9-21 to 1-9 Miltown massacre. By the 1990s Clare’s most famous player, Noel Roche, an accomplished international rules footballer, was reflecting that he had lost a Munster under-21 final against Cork by two points.

A year later when Clare had 13 of the same team still eligible, an entirely new Cork side beat them by 13. “I knew then,” Roche later recalled, “I probably wouldn’t win very much in a Clare jersey.”

The provincial final 28 years ago that proved him wrong has passed into a few legends. It brought Marty Morrissey, then a freelance broadcaster, to prominence as he excitedly called the commentary on his own county’s astonishing success.

Clare’s Munster title was emphatic and deserved, not by some scuffed injury-time goal. They endured early misfortune, much of it self-inflicted, kicking wides when they had the wind and missing a penalty when Gerry Killeen, who would atone with four points from play, hit a weak shot at Peter O’Leary.

In the press box at half-time the reported view was that they should have been six in front but a wides count of seven compared to Kerry’s one meant the lead was minimal.

Goals from Colm Clancy and replacement Martin Daly came in quick succession in the 51st and 58th minutes and Clare won pulling up, according to Pat Roche’s report in this newspaper.

“Only a couple of players in the Clare half of the pitch, as Pa Laide, Timmy Fleming and Maurice Fitzgerald were forced back into containing roles.”

The result resonated like a thunderclap. I was in Clones watching 14-man Donegal edge out Derry – little realising that we were watching the prospective All-Ireland champions. The news from Limerick kept coming: Clare are beating Kerry – Clare are still beating Kerry.

Clare’s achievement is often taken in tandem with Leitrim’s Connacht success two years later – a first in 67 years – as evidence of a golden age of football uprisings when taken together with the re-emergence of Ulster counties in the early 1990s.

But this was different. It wasn’t just the long years of futility that weighed against Clare but just weeks earlier in the season, Kerry had given a Cork side with legitimate All-Ireland ambitions an absolute trimming down in Páirc Uí Chaoimh on an afternoon when Maurice Fitzgerald turned the dial to 11.

So, where did this come from?

The passing of Noel Walsh at the end of April revived nostalgic memories of Clare’s coup and for good reason. As an administrator, Walsh – who chaired the Munster Council and ran for the GAA presidency – advocated tirelessly on big issues, successfully for the opening up of association grounds to other sports and unsuccessfully in trying to keep the Railway Cup on life support.

Of huge significance to his county, though, was the decision he narrowly piloted through Munster to institute an open draw in the provincial football championship.

Walsh’s reasoning was that the weaker counties, Clare, Limerick, Tipperary and Waterford were unfairly expected to beat both Cork and Kerry if they were to win the title.

Ironically, the very first open draw consigned Clare to the same side of the draw as the two big guns but Walsh knew that it was a long play. A lieutenant colonel in the armed forces, he helped to recruit a young army officer, John Maughan, whose own football career with Mayo had been cut short by injury, to manage the team.

In an interview with The Irish Times before the 1991 first round with Kerry, Maughan was content – and prescient – with the new provincial arrangements.

“It will all bear fruit, if not on Sunday then in the next couple of years. We are very optimistic. If we play well and get the run of the ball we can beat Kerry. We believe that firmly. We fear nobody.”

I met Maughan for the first time in the West County Hotel in Ennis after a league match against Limerick in December 1991. Sharp, good-humoured and candid about the team, he clearly meant business and Clare’s ascent was already under way with the All-Ireland B title won a month previously.

I had actually turned up at what wasn’t a particularly box office fixture out of interest in the opposition. Limerick had been the first beneficiaries of the open draw and under the management of former Kerry star John O’Keeffe, had reached the Munster final and with the late Danny Fitzgerald as fire starter – he got an All Star nomination that year – ran Kerry really close in Killarney.

They weren’t good enough for Clare by the end of the year.

Maughan took the team to a league quarter-final in the spring of 1992 and there they narrowly lost to Meath so the upward trajectory was visible.

Still by the time of the Munster final, you had to face facts. As the late Eugene McGee said afterwards, how could Kerry not be complacent when they had been providing beatings on demand in the fixture apart from the blip in 1949?

If their performance levels had dipped a bit when beating Limerick in the semi-finals, the destruction of Cork made Kerry the hottest of favourites.

It all turned out to be a calamity for Mickey Ned O’Sullivan. Having been handed the challenge of taking over from Mick O’Dwyer in 1989, O’Sullivan knew that he had a major rebuilding programme on his hands.

He gave an interview to the Sunday Tribune in which he said that he hoped Kerry players would be better for having the experience of county football – nothing exceptional these days after Jim Gavin’s five-in-a-row and its associated ‘whole-life’ emphases but in a county that had gone a whole four years without an All-Ireland it was treated as an eccentric priority.

O’Sullivan’s first championship ended in one of the great matchday gags: the first recorded instance of someone shouting, ‘lock the gates and make the f***ers watch’ – as Cork put Kerry away by 15 in Páirc Uí Chaoimh. But a year later he had turned that around and won Munster.

Even if another untimely trick of fate – three decades on from the 1960s, Down footballers meeting the next beatable Kerry side – saw All-Ireland semi-final defeat, by 1992 Kerry were moving on.

Defeat by Clare that July brought the curtain down on Jack O’Shea’s monumental career. By then he had been repurposed as a full forward but called it a day in Limerick after that defeat.

Less well-known is that on that afternoon almost as a passing on of the torch, the 18-year old Séamus Moynihan made his debut just weeks after sitting his Leaving Certificate. He lined out a centrefield before going on in years to come to establish himself as one the game’s best defenders.

An interesting footnote about Kerry is that as well as Moynihan, six others who appeared in Limerick would play a part in the county’s next All-Ireland win, five years later.

A seventh went on to play in the 1998 All-Ireland – Mick O’Dwyer’s son Karl, who joined his father in Kildare and played a major role in the lifting of that year’s Leinster title.

Clare were on the threshold of enhanced status. They lost the All-Ireland semi-final against Dublin but proved durable and competitive. Thereafter they became a Division One football county for the next few years.

I later heard that a gathering that same afternoon in the Dergvale Hotel after Kilkenny had beaten Wexford in the Leinster hurling final discussed the shockwave in Limerick. One small-ball zealot glumly remarked that this would kill hurling in Clare for a generation.

In the end the footballers’ achievements proved more inspiration than desperation and three years later the county would take Liam MacCarthy home for the first time in 81 years.

1 Gordon D’Arcy: the next fear for Irish rugby is England in Twickenham
2 Seán Moran: Fallout from Tyrone final celebrations will concern GAA
3 Pro14 teams need private planes to keep show on the road
4 Born to ride, born to win: Sam Bennett, the making of a green machine
5 How Dundalk’s opponents Sheriff started on wrong side of the law
Real news has value SUBSCRIBE