Meath manager insisted fitness expert be brought back from China 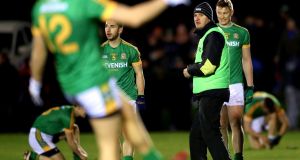 Meath manager Andy McEntee: “Having the same guy overseeing all the training regimes for all the teams in a county makes sense.” Photograph: INPHO/James Crombie

Andy McEntee has revealed that he only agreed to manage the Meath footballers on the proviso that strength and conditioning expert John Coghlan be lured home from China to work with the team.

The duo worked together in 2012 when McEntee guided the Meath minors to Leinster and All-Ireland finals, and again in 2015 and 2016 when McEntee was in charge of AIB All-Ireland club winners Ballyboden St Enda’s.

McEntee’s insistence they join forces again with the Meath seniors for 2017 presented officials with a quandary as the renowned sprint coach was based in China coaching, among others, Su Bingtian, the first Asian athlete to run 100m in less than 10 seconds.

The early signs are positive for Meath as they can gain promotion to Division One of the Allianz League for the first time since the early 2000s on Sunday if they defeat Clare and if Galway lose against Kildare.

“John had gone out to China in December of 2015, and I convinced him to come home when this job came up for me,” said McEntee. “He works with the Meath County Board now. He is in the equivalent of Bryan Cullen’s role in Dublin. It is a big appointment and goes to the heart of the question about resources and structures within Meath.

“This is his day job now and hopefully we can get the most out him between clubs and schools, academies and stuff like that. He is there to be used.”

The appointments of Cullen and Coghlan, while amounting to an extra salary, suggest there can be significant benefits from having a single fitness expert in place to oversee all teams in a county.

“If you want to be competitive then a bit of joined up thinking is necessary, and having the same guy overseeing all the training regimes for all the teams in a county makes sense,” said McEntee.

“To be perfectly honest, it was part of the gig when I came in. I would have been reluctant to do it without him, that is how much I regard him. He is that good, and that is one of the big things we are trying to do, to surround ourselves with the best possible people that we can.

“It is about the team around the team, and I think I am fortunate enough to have the people I have around me now.”

Meanwhile, McEntee was highly critical of the new “Super 8” championship format which will introduce a new group element at the All-Ireland quarter-final stage, resulting in more games between the top teams.

“Why don’t they just call it what it is, which is a money-spinning racket,” McEntee said, at the launch of the Electric Ireland GAA minor star awards. “I think it’s a money-spinning racket. It’s fine for those teams that do make it that far but what about the other teams? What about club football? The prize for getting into the ‘Super 8s’ is so good that no county is going to allow club football to be played for at least a month beforehand.”