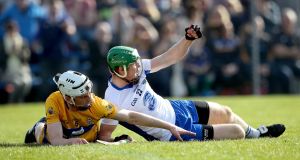 For 50 minutes in this blazing Allianz Hurling League Division One encounter, played in weather to grace the championship, Clare held the whip hand. Having recovered from Waterford’s whirlwind start, the home side had played themselves back into the game and gained control on the scoreboard in the 15th minute.

Waterford replacement Tom Devine turned the match on its head in the 64th minute. Shane Bennett made a strong run from the right to get past Cian Dillon and picked out Devine whose first shot was saved by Andrew Fahy in the Clare goal – a fine reflex stop – but the striker followed up to bundle the ball home to turn a one-point deficit into a two-point lead, 2-19 to 1-20.

Four points were shared in the minutes remaining, bulked out by an extensive injury-time and Clare claims that there should have been a free for a foul on TG4 Man of the Match David McInerney who left the field injured, but the margin survived.

Clare essentially ran out of steam in the second half. They had taken a two-point lead in at half-time, which wasn’t for Waterford a great return from a match they had been leading by six after as many minutes. But on the other hand it was acceptable enough given that they had lost the initiative comprehensively in the second quarter to the point where they trailed by five.

In the third quarter Clare looked to use the strong breeze to get quick ball into Aaron Shanagher and Cathal McInerney and attack quickly. It paid early dividends. Tony Kelly, back after his club adventures, pointed, as did Podge Collins, wing back David Fitzgerald and McInerney.

Waterford kept pressing but Clare’s defence looked sufficiently in charge – there were some fine high catches by David McInerney and Dillon, to thwart Devine and Stephen Bennett – but they needed to keep scoring.

They didn’t and from a position of real strength – in the 59th minute Kelly switched play from left to right for Cathal McInerney to push the team 1-20 to 1-16 ahead – their control eroded. Waterford outscored their hosts 1-5 to 0-2 in the time remaining.

This was an exceptionally exciting match, in keeping with the counties’ encounters in the past 12 months. It was played in the edgy context of establishing final league positions and in the roulette-wheel rush of the final day of the regulation season, Waterford’s robust finish and the drip feed of Pauric Mahony’s free-taking throughout landed them in the quarter-finals with their disappointed opponents heading instead for a relegation playoff against Dublin.

Both counties have had fitful leagues and perhaps as befitting the two most recent winners, there was a sense that going the distance wasn’t a priority for either in terms of championship preparation. Nonetheless reaching the quarter-finals, rather than the relegation playoff, remains the more attractive option regardless of how dimly overall ambition for the competition burns.

Waterford looked dazzling for the opening few minutes. Sharp and predatory in attack, their forwards took Clare by storm and led 1-3 to nil after six minutes. The goal was finished by Shane Bennett after Conor Gleeson had driven in a high ball in the fifth minute.

Clare joint-manager Gerry O’Connor reflected afterwards that the opposition had successfully isolated Dillon in the full-back line and that this had caused problems. Despite that, the home side’s defence recovered from the slow start to get to grips with the Waterford forwards and gradually dug themselves in to the match. A series of determined blocks by both Dillon and Séadna Morey set an altered tone and the match switched course.

The centrepiece was a goal by Collins, weaving around the last line of defence to thunder home a goal in the 15th minute and put Clare 1-5 to 1-4 ahead.

“We got going,” said Clare’s other joint-manager Donal Moloney. “Our best hurling of the season was in the 20-minute spell following that but we didn’t sustain it and at the top level you have to sustain it.”

Waterford manager Derek McGrath was delighted that his players had responded so well to the challenge.

“They have a lot of guts and they stood up tall in the second half. Stephen Bennett nipped two or three points . . . you know, young fellas standing tall in the face of a little bit of adversity.

“While we’ve tried to cocoon ourselves away from the reality of the pressure of relegation or otherwise it can seep through to the other players to the point where it hinders their play and I’m delighted we got over that today.

“If you just take the flipside, which would have been heading into a relegation match next week, I don’t think it would have scarred us but it would ultimately have affected our thoughts for the week.”

They face Galway in the quarter-finals at a venue to be decided by coin toss. McGrath joked that with their record (Waterford won their away matches this campaign and lost their home fixtures) it might as well be in Salthill but he’ll find out like everyone else on Monday.

Level 5 golf shutdown: Ireland one of few countries to close courses 16:00
The biggest game in their history? Ireland women v Ukraine - all you need to know 13:06
Dan Leavy could make Leinster return against Zebre 12:47
Tennis clubs in Republic of Ireland to close under Level 5 Covid-19 restrictions 12:02
Pep Guardiola laments Man City’s injury woes 10:26
Crossword Get access to over 6,000 interactive crosswords