McLoughlin’s late point helps Mayo take one against the head

Stephen Rochford’s side win Tyrone clash to move towards safety 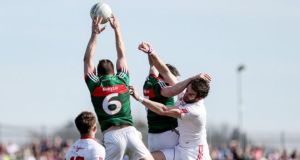 It wouldn’t be Mayo if there wasn’t a crisis that could be swatted aside on the back of one result. Nowhere are the dogs on the street quicker to howl for the end of days, nowhere does the chewy bone of a ground-out win carry the taste of better times to come. This makes it five out of the last seven leagues where they came to the penultimate game with stress balls squeezed to dust. They’ve remained standing each time.

This was one they took against the head and will feel all the sweeter for it. Kevin McLoughlin won an engrossing encounter with the only score of the closing 18 minutes, a drilled left-foot effort from 40 metres. It was one of only six shots Mayo took in the second half, even though they had the breeze at their backs. Though they dogged it out, they won’t need telling that Tyrone left this behind them.

This was all a matter of economy. Tyrone scored 0-12 from 30 scoring chances; Mayo scored 1-10 from 17. Mickey Harte’s side kicked 15 wides across the afternoon and dropped three balls into David Clarke’s chest. Mayo had six wides and nothing short. Fourteen different Tyrone players tried their luck with a shy at the posts, seven of them scored. Five Mayo players shot, all five chipped in with at least a score.

“It tells its tale on the scoreboard,” Harte conceded afterwards. “Again, I can’t fault the effort of the boys, they worked hard, particularly in the second half against the breeze. There’s no doubt we created enough chances to get something out of the game but if the ball doesn’t go between the posts, it doesn’t work.

“So there’s learning in that for us. But I can’t fault the endeavour whatsoever. It was a really good game in terms of what the players are asked to give and I think they gave it. The thing they didn’t get out of it was a favourable result.”

Anybody who came to Omagh fearing a tight, niggly affair would initially have been heartened to be wrong. For the first 55 minutes or so, there was plenty of summer here. The weather felt like it had been informed that the clocks had changed, the players seemed to have got the memo as well. Only in the closing quarter did the pace relent, the sheer intensity of proceedings up to then taking its forfeit.

Tyrone were generally in charge for much of the game and when they made it count, they looked the part and more. Mark Bradley had one of those afternoons that make you pine for the old ways and pronounce with total certainty that he’d have been a star when they played this stuff 15-on-15.

But he didn’t have enough around him to go along with his three points from play. For neither the first nor, you suspect, the last time, Tyrone lacked the stardust in attack to turn their general dominance into a tally worth going to war with. They were robbed of the creative influence of Niall Sludden early on with a dubious black card but even so, creating chances wasn’t the problem. Finishing them was.

As a result, they gave a sucker an even break and though Mayo aren’t at their best just now, they have enough muscle memory to make merry with that sort of largesse. This game was level eight times and in that sort of fight, Mayo will always know the worth of landing one punch at the right time.

Tom Parsons’s goal in the first half was rifled home with aplomb after the Mayo midfielder delayed his run and came off Andy Moran’s shoulder at the just the right time. Up to then, Mayo had been coughing in Tyrone’s dust a little, staying in touch through a gorgeous Shane Nally score from out on the left and a couple of Cillian O’Connor bombs from distance.

But the goal gave Mayo a touch of swagger and Paddy Durcan came through for his second point soon after, they were 1-6 to 0-7 ahead. It took a delicious point on the run from Seán Cavanagh just before the break to reduce the margin to one.

It had been a cracking game, all told. Lee Keegan’s afternoon had ended not long after Sludden’s, also to a black card. Tyrone did much of their best work driving at the heart of the Mayo defence in his absence and Kieran McGeary’s outside-of-the-boot point on 45 minutes levelled matters.

They went tit-for-tat from there to the end, neither side going more than a point up at any stage. O’Connor was money from dead balls for Mayo, Bradley the only bankable boot on the Tyrone side. His third point on 58 minutes made it 1-9 to 0-12.

But by now, both sides were out on their feet. It was all turnovers and to-and-fro from there to the end and it was clear that any side who could muster up a score probably wouldn’t need to muster up two.

McLoughlin did the needful and though Tyrone could feel aggrieved not to find a free near the end to lay on an equaliser, Mayo held out. A point at home to Donegal will keep them up now. In their own hands, just the way they like it.

1 Simon Zebo: ‘It’s been tough not being able to put my hand up to play with Ireland’
2 Matt Williams: The economic earthquake for European rugby is coming
3 Pat Critchley: ‘You teach or coach the person first and the subject or the game second’
4 Cheltenham faces criticism after racegoers suffer Covid-19 symptoms
5 Ian O’Riordan: Learning to run for the first time all over again
Real news has value SUBSCRIBE

Sideline Cut: The fascinating final chapter in Tiger’s tale left in limbo for now 09:00
Simon Zebo: ‘It’s been tough not being able to put my hand up to play with Ireland’ 08:00
Matt Williams: The economic earthquake for European rugby is coming 07:00
Sporting Poetry: Seeing far beyond the scoreboard 06:00
Pat Critchley: ‘You teach or coach the person first and the subject or the game second’ 06:00
Crossword Get access to over 6,000 interactive crosswords