Down shake off Fermanagh to reach Ulster semi-finals 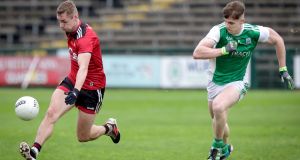 A pacey Down side eventually steamed clear to record an impressive victory over a weakened Fermanagh side who were missing nine regulars from last year’s campaign.

The home side managed to stay with the winners until early in the second half but there was no doubting the visitors’ superiority over the last 25 minutes.

But a brilliant goal, superbly created by Down’s inspirational captain Caolan Mooney, was the crucial score in this cat and mouse affair on a mild November day which was surely thieved from summer in Brewster Park.

Mooney, who has recovered from a serious assault last year, cut through the Erne defence on a blistering 50 metre solo run and fed the inrushing Daniel Guinness.

The Erne defence was skewered and Guinness could have scored himself but unselfishly transferred the ball to full-forward Donal O’Hare who palmed the ball to an empty net.

That happened in the 42nd minute and the impressive O’Hare had already hit 1-4 by that stage and was promptly rewarded by the bizarre decision to take him off.

He wasn’t injured and Down could have suffered against more formidable opponents but all the fight had gone from the understrength Erne side who handed championship debuts to diminutive keeper Sean McNally, Luke Flanagan and the impressive Josh Largo Ellis.

Barry O’Hare put them two points up with a great effort from the wing but Corrigan hit back with two pointed frees to level matters at 0-8 each before the killer goal.

Down totally dominated the rest of the match as the points flowed from O’Hare, Jerome Johnston, Mooney and subs Ryan Johnston and Corey Johnston.

Fermanagh failed to score for a further 25 minutes with token points from Paul McCusker, Conall Jones and Daniel Teague.

But the winners were never in any danger as they cantered home to an Ulster semi-final date with Cavan next Sunday.

Fermanagh did manage to stay in the game until O’Hare’s clinching goal, but were unable to offer any further resistance as the pacey Down forwards ran riot in the final quarter.

Down responded in kind and, when the flying Conor Poland was fouled in full flight, full-forward Donal O’Hare coolly converted the resultant free.

That set the pattern for a cat and mouse opening half that also saw some fine individual scores from both sides.

Both full-forwards Fermanagh’s Tomas Corrigan and O’Hare of Down had a bit of a shootout as the half progressed.

Fermanagh edged in front through a fine point from beavering wing-forward Ciarán Corrigan but Down hit back with another pointed free from O’Hare after team captain Mooney was fouled after the first water break.

Fermanagh full-forward Tomás Corrigan took a clever mark from a Ciarán Corrigan pass and pointed only for O’Hare to strike again, this time from play.

But Tomás Corrigan was causing the Down defence major headaches and he hit two points in quick succession, one from a free and the second a magnificent effort after he shrugged off four tackles and struck confidently over the bar to put Fermanagh ahead by 0-6 to 0-5 eight minutes from the break.

However, that was to be the home side’s last point and Down finished the half stronger with two brilliant long- range efforts from Mooney and Barry O’Hagan to put them into a 0-7 to 0-6 half-time lead.

It was just about deserved, but four of their scores came from soft turnovers coughed up by the Erne men.

But in the second half they were simply overwhelmed by a rampant Down side who, with forwards like the O’Hagans and Johnstons, can trouble any side.