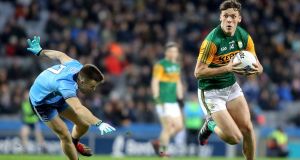 About this time last year when Dublin were heading into their winter of perfect content Marc Ó Sé ran into James McCarthy, congratulated him on his five in a row, then teased him about sharing some of the love with Kerry.

Straightaway McCarthy turned the conversation towards David Clifford, how impressed he was by him in the All-Ireland draw and in the replay, and that he was the one player who truly worried Dublin.

Things have changed since then, only not the gist of that conversation – as Ó Sé believes the one player who can truly worry Dublin, if the teams do meet in the pruned championship that lies ahead, remains David Clifford.

There was ample evidence of that on Sunday when Clifford helped East Kerry to back-to-back county titles, scoring 1-4 including an early second-half goal that fully distanced opponents Mid Kerry.

“Look at the county final at the weekend, Peter Crowley was marking Clifford for the goal, and you couldn’t say Peter did much wrong,” says Ó Sé. “What David did do was the running off the ball, running behind, right, doubling back left and just when you think worst case scenario a point, hits a bullet of a shot. He’s just phenomenal . . . If you look at the drawn match last year he didn’t score that much, but he was such a huge influence; and again in the replay.”

Ó Sé also notes other names that emerged from the county championship who can supplement the Kerry captain’s influence, still only 21.

“Joe O’Connor of Austin Stacks, coming from the Under-20 ranks, has been outstanding. Tony Brosnan is another player to watch, from Dr Crokes, he has been outstanding too before he got injured [a punctured lung]. So they’re all going to be looking over their shoulder, with the exception of Clifford.”

Before Kerry’s championship opener against Cork on November 8th, they have two remaining games against Monaghan (away) and Donegal (at home) and they might throw up some new names too.

“The league is funny, but winning games breathes confidence, and Peter Keane will want his players winning all his games. So I think there will be huge emphasis on those two national league games, East Kerry and Mid Kerry players back this week too, so it’s all systems go.”

Are the Dubs vulnerable?

“I think they are because the one thing that really suited Dublin as well was the Super 8s. They could actually afford to lose a game, where as this year there is no room for error. There is a flip side to being without Hill 16, because sometimes we would look at it and think it was worth a few extra points for us, but without Jack McCaffrey they are a different team. They have quality players all over the field, but he’s a huge loss. And the Jim Gavin factor as well, he’s gone. A new manager does bring freshness, but this system, this year, on a given day, if you’re up for it, I think this is the one year Dublin can be got at.

“But Kerry have to go down to Cork and Cork are flying, albeit in division three. They’re showing this new found energy and for Kerry to go there, in a one-off game, that’s going to be really hard. That’s what this championship will bring more than any another.

“And you do need to look at the Kerry full-back line and say there are three man markers there, who on any given day, can do a job? Because if you are going to take on the likes of the Dubs, who’s going to mark Con O’Callaghan, Dean Rock, Paul Mannion? What we’ve seen of them, you might keep two of them quiet, but on any given day the third one will cause wreckage.”

Former Kerry footballer Marc Ó Sé was speaking at the launch of The Toughest Season, a picture book to be published in collaboration with the GAA’s official photographers and documenting this season unlike any other.