GAA rules out revival of provincial and All-Ireland club championships 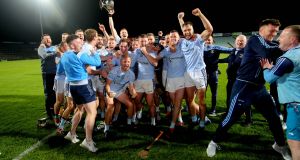 Na Piarsaigh players and officials celebrate their victory over Doon in the Limerick SFC final at the LIT Gaelic Grounds. Photograph: Ryan Byrne/Inpho

Despite the rising clamour of various county champions, the GAA has reiterated that there will be no provincial and All-Ireland club championships.

“It’s not going to happen,” is the unambiguous position of GAA head of games administration, Feargal McGill. “We’re operating on the basis that the intercounty championship will go ahead and if it doesn’t, the likely reasons that will prevent it from taking place are going to be the same reasons that club championships can’t either.”

He was commenting on the much mentioned possibility that were the intercounty schedules to run into difficulties with the resurgent pandemic, a club championship could be run off in a relatively short and uncluttered period.

Recent events may have shaken the GAA’s confidence in the achieving a relatively smooth conclusion to a most dysfunctional year but one clear success has been the club activities.

Beginning in mid-July and now either reaching or having reached a finale in most counties, the local championships have provided entertainment and a memorable summer during which clubs have had unparalleled access to their players and even in the partial or complete absence of spectators, the season has been a success.

The one reservation has been the fact that the county finals mark the end of the season. At first it wasn’t considered an issue, as people were so thrilled to have any matches available but in recent weeks, as the roll-out of county champions has started the lack of further competition has become higher-profile.

Irish Times football analyst Kevin McStay made the point at the end of August that the cancellation of the club championships’ normal season had in a way compromised the county activities.

“It’s a pity that the revised calendar has no room for provincial or All-Ireland championships at this level,” he wrote, “because I think that they’re the games that get wider engagement from the public. Could that have been accommodated? Probably not but it detracts from the club scene.”

The weeks since the first county final, Wexford hurling, have seen a succession of managers and players expressing disappointment that they can’t go on to represent their county, as usual.

In football, the obvious loss of opportunity is Corofin’s. The three-in-a-row All-Ireland champions are in the Galway semi-final and remain on course for an eighth successive county title. From there, they would have the opportunity to extend their unprecedented record of three consecutive All-Irelands, making them the most dominant club team in the 50 years of the championship.

Hurling is also losing out on what would be shaping up to be a titanic struggle, as the winners of the last six All-Ireland titles are still involved. Last weekend saw two of them, Na Piarsaigh (winners in 2016) and Cuala (winners in 2017 and ’18) winning their respective titles in Limerick and Dublin in impressive fashion.

Under new manager Kieran Bermingham, who captained the club to its first county and provincial titles, Na Piarsaigh were big winners over Doon and looked sharp and hungry after a couple of relatively disappointing years that saw them lose their first Munster championship match in 2018 after four titles in the decade and last year they missed out on an opportunity to record back-to-back wins in the county when losing to Patrickswell.

Cuala came from behind to defeat the other club that has dominated Dublin hurling in the last decade or so, Ballyboden, making it five titles in six years for the Dalkey club.

“We would have loved a crack at Leinster,” said coach Willie Maher afterwards, “but it’s the nature of the season and the pandemic that has dictated all this on us.”

All-Ireland champions for three of the past six years, Ballyhale Shamrocks, have reached their county final this Sunday. Like Corofin in football, they would have been on the verge of history, as no hurling club has won three-in-row All-Irelands.

In fact the All-Ireland champions for the past two years have yet to record three successive Kilkenny titles and that has been a big motivation for them this season. It won’t, however, be straightforward as opponents Dicksboro preceded them as county winners in 2017 and have been in flying form so far in the championship.