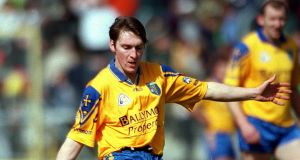 Former Roscommon footballer Conor Connelly, who died suddenly on Saturday at the age of 44 near his home in Ballycumber, county Offaly, has been described as “magnificent” in his contribution to the county’s 2001 Connacht title win.

John Tobin, who managed the team, spoke of his shock at the sudden passing of his former wing forward and remembered him fondly.

“It’s awful. I was saying to one of the lads that we won’t, with the restrictions, be able to go to his funeral as a team and pay our respects to the family in their grieving process.

“My memory of him was a young fella with a mop of black hair, very athletic and very quick. He was a great runner with the ball. In the Trevor Giles mode, he could get possession and carry at pace – he was an imposing figure on the ball. He had a magnificent year in 2001.”

Roscommon reached the league semi-finals that season, which had been delayed because of the foot-and-mouth outbreak. There they lost to Mayo, a defeat that would be avenged two months later in the Connacht final.

Firstly, they defeated eventual All-Ireland champions Galway in the provincial semi-final in what was the first year of the qualifiers.

“My memories after so long in the game can be vague enough,” said Tobin, “but I have crystal-clear recollection of Conor being outstanding in Tuam Stadium that day. He was a very good player but what he had was fantastic passion; he threw himself into it and was also a great fella to train and apply himself – fearless if you were looking for someone to go in for the breaking ball.”

Ian O’Riordan in these pages noted the vision and accuracy of his kick passing, which set up Roscommon’s vital second goal.

Although it took a late goal by Gerry Lohan in the final to land the title, Connelly kicked the first point of the day in Dr Hyde Park.

“I can also remember clearly the point he scored in the Connacht final. It’s funny the things that stick out for you. You’re probably always worrying when the first score will come and settle you and I can see him getting it.

“It was rare at the time as a formal strategy for everyone to drop behind the ball but forwards were industrious. He was one of those players and if he lost the ball he wouldn’t be long trying to go and retrieve it but he’d be coming back after the ball – not coming back as a strategy to fill a space.”

The season ended in disappointment for Roscommon, as Galway reversed the Connacht defeat in the All-Ireland quarter-finals.

Longford manager Pádraic Davis, a contemporary, pointed out on Twitter the sad coincidence that in successive years at St Mel’s College, where Connelly won a Leinster colleges title the school’s prestigious Fr Manning medal – “selected on the basis of progress at all games, for sportsmanship and an active interest shown in the common good of student life” – the medal was presented to Connelly in 1994 and former Leitrim footballer Shane McGettigan the following year, both of whose lives ended shockingly prematurely.

Connelly was a solicitor in Dublin and had moved to Ballycumber after getting married.

On Saturday, county chair Seamus Sweeney extended his own sympathy and that of Roscommon GAA to the Connelly family on the very sad news.

“I extend my sympathy and the sympathy of Roscommon GAA to his wife Claire, their three young children and to Conor’s parents Jimmy and Nora.

“I always admired Conor as footballer. He was a fine tenacious player who gave his all when wearing the primrose and blue. Like Rossies everywhere I really am saddened by the news.”

County assistant secretary and Creggs club-mate Gerry Keegan also extended his sympathies to the family and said: “It’s heart-breaking news. Conor was such a popular figure in Creggs GAA club and was always there to lend a hand when needed even after his playing days came to an end.

“In our successful junior championship-winning year in 2016 Conor brought us up to his current club in Ballycumber Co Offaly for a midweek training session the Wednesday night before the replay. His speech to us that night helped us clinch our first county championship in 33 years.

“Conor was a fantastic footballer and his work rate for the county jersey was unquestionable, he was also a great person off the field and was always on hand to give you good advice when you’d need it.

“The thoughts and prayers of everyone here in Creggs GAA club go out to his father and mother Jimmy and Nora, his wife Claire and three children Cara 11, Rossa 9 today, and Eoghan 6, his brothers Robert, James and Daragh and his sister Sharon. Conor will be sadly missed and will never be forgotten in our club.”

Rodgers says he was ‘really knocked’ by coronavirus 18:30
GAA preparing for earlier return to activity but pitches to remain closed 18:07
HRI announces full jumps programme up to start of August 17:03
La Liga season to restart on June 11th with Sevilla-Real Betis derby 16:26
Liverpool and Everton to oppose plans to play games at neutral venues 17:18
Crossword Get access to over 6,000 interactive crosswords