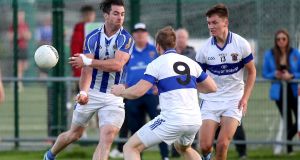 Michael Darragh Macauley has crunched the numbers and heard the question enough times already – Please God, tell us there will be a championship this year – and each time the answer comes out the same.

“A no-brainer”, says Macauley, who given the current circumstances would just as soon play the 2020 football championship in front of Dessie Farrell and his dog as he would 80,000 people in Croke Park. It seems he’s not alone.

While the GAA remain restricted to playing all games without any spectators until September 13th, at the earliest, Macauley believes that even if attendances for the championship are capped back at 200 people, there’s still ample reason for it to go ahead.

“I don’t know how many times people have asked me, ‘Please God can we have a championship this year’, and so I know just anecdotally what it means, how much it is missed,” he says. “It’s no secret, if we can get it up, in whatever form, in front of whoever, it’s a no-brainer, that we’ll just play.

“From a player’s point of view, I haven’t come across anyone who wants it any other way. Lads are happy to play, everyone I know, club and county, have put in a shift over the last while. We were all doing our 5ks, all that, everyone in the country was in the same boat, not just intercounty athletes.

“And it’s nice to have a little endgame in sight, with that sort of stuff. So as far as I know, anyone I’ve talked to just wants to play ball, be it in front of the dog, or 80,000 people.”

GAA president John Horan reiterated his belief over the weekend that while the association supports the running of intercounty championships this year, if they are to take place, they won’t be held up to accommodate counties who find themselves in any coronavirus lockdown; Taoiseach Micheál Martin also gave his support for a championship in 2020, even though some county boards have expressed concerns about the financial implications of playing without any gate receipts.

Macauley suggested the morale boost might make up for any financial shortfalls: “I’ve no idea how the financials work of any county board, to be honest, but I’m sure people will make a way. Covid aside, I think we’ll just make it happen, on a lower scale, and maybe it’s me being ignorant, but I can’t see financials getting in the way. It can be done. It wouldn’t be as much craic, that’s a fact, but lads would be happy to do it.

Speaking ahead of AIB’S The Toughest summer documentary, which airs on Tuesday night and looks at some of the challenges presented to players during the pandemic, Macauley also admits the lockdown period at the start of the summer helped facilitate his recovery from injury.

“I wasn’t due to play [in the league], and was probably aiming for the first round of the championship anyway. So it fell very differently for me, it was nice to have no huge goalpost in my face, and the whole lockdown just ended up being an extended period of rehab. But I wouldn’t call it a break.”

The seven-time All-Ireland winner, who turned 34 last month, is currently preparing for a quarter-final tie with his club, Ballyboden St Enda’s, who are set to take on the winners of Raheny and Oliver Plunkett’s/Eoghan Ruadh this Sunday, or possibly Castleknock, depending on the results (that game deferred to this Wednesday evening because of a Covid-19 case in Raheny).

There was also a case in his own club, earlier this month, highlighting just how unpredictable the situation remains: “I went out to play a dead-rubber game, just last week, against Whitehalls, and I went in thinking ‘who knows when the next game of football is going to be’, it could be a long time, even though it’s meant to be next week. Who knows?”

His day job is as sports and engagement manager with the North East Inner City Initiative, working on various regeneration projects in communities that have been badly affected by crime and drugs, also gave him a different take on the lockdown, especially on his return to work.

“We were looking to be on the edge, in terms of getting people back, and active, because the area could be hit a bit tougher than others. It was so hard for kids not having school for that amount of time, then not having their clubs, their sports teams, so whenever we could get 15 together, we got 15 together.

“It was important to try and offer something. I probably would have gone off the rails myself at that age, without having all the usual clubs and things to tie into. But the lockdown, I’m not making light of it either. Personally, I got on pretty well, but I’m always cautious saying that, because a lot of people I know didn’t have a good lockdown. Some of my sanest friends had a really tough time. I didn’t have kids grabbing out of my ankles, and I still have a job at the end of the day, and a lot of people weren’t able to say the same thing.”

He’s also okay with the currently defined spilt between club and county; “It’s actually been very nice, not having to tie in with the county, and just give it socks with the club. More so than ever, from an intercounty point of view, the club takes even higher precedence. You better be running amok with your club, if you want to be starting for Dublin. Everyone is trying to dance around it as much as they can.”