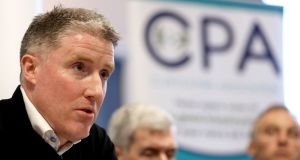 The recent high-profile support for a split club and county season has focused a lot of attention on Wednesday’s meeting of the Fixture Calendar Review Task Force (FCRTF).

Despite this, it’s only a scheduled get-together for the task force whose radical proposals were largely sidelined by the impact of coronavirus. It was before Christmas 2019 that the FCRTF issued a report, proposing three options to take the football championship forward.

The third option was that the 2018-19 format – the round-robin Super 8s, which still has a year of its trial run to complete – remain with a couple of changes to tighten its schedules.

“It’s part of a process,” according to Feargal McGill, GAA head of games administration and a member of the task force. “We left off after congress last February when a number of motions were deferred so that they could go to special congress in September, which obviously isn’t happening and we’ve an education programme to run for the counties.

“This meeting should have taken place in March but didn’t for obvious reasons. It’s a reset really to catch up on where we left things off and where are we with the report.”

On the agenda will be the idea of a split season, which has been advocated by both the Gaelic Players Association and in an interview with the Irish Independent last weekend, GAA president John Horan.

The Club Players Association, which first floated the idea of a split season, also weighed in by calling on this week’s meeting to endorse the proposal.

“It may have taken different timelines and different routes to get to this point,” said CPA chair Micheál Briody, “but there is a growing realisation that a split season approach is the best solution to fixing the fixtures. It is reassuring now to see that the GAA, GPA and CPA have come to similar conclusions. We have always said it is about what is right, not who is right.

“We believe there are grounds for cautious optimism. Opportunity has presented itself; it would be unforgivable to let it pass.”

The idea was also included in the FCRTF report last December but not put forward as a proposal.

“The split season proposal was considered,” said McGill, “but not proceeded with and that will be reconsidered but there’s a lot of work to be done on it yet. It was discussed at length but there were two things that persuaded us there was no point in putting it forward.

“Firstly, it had been really difficult to get the All-Ireland finals brought forward by three weeks and that barely got over the line because there was a lot of opposition. Coming forward with July dates for the All-Irelands would have had people saying, you’re mad.

“The other thing was we weren’t going to end up with any more club weekends – however, you could well end up with better quality club weekends. Then there was the question of county players.”

The report stated: “separating players entirely from their clubs for over half the year would not be desirable. County players need to stay connected to their community and need breaks from the intercounty set up.

“Neither would clubs be likely to support such a move – whatever the drawbacks of the current ‘windows’ approach may be, at least it ensures some visibility of the county player with his club in the spring.”

McGill said however that the GAA exists in a far different world than the one into which it released its report just over eight months ago.

“I think people have a different perspective now. If I’d told you last January that we’d decided to reschedule the All-Ireland finals for December, we’d have had a revolution on our hands. As it turned out, people were glad of it. The new reality is that people would probably be more open it.”

The recent publicity on the split season came initially from the GPA, which in the course of consulting its membership on the matter, acknowledged that the impetus had come from players, many of whom have expressed a positive attitude to this year’s enforced inversion of the club and intercounty season, which has allowed an undisrupted focus on club fixtures.

In his comments at the weekend, association president Horan made it clear that he had been an advocate of the idea for a while.

Wednesday’s meeting is likely to approve further consideration of the spilt season but with its scheduling knocked way off course by the pandemic there are important stepping stones to be established.

“The big decision is ‘when will congress happen?’” according to McGill. “It may well be next February at annual congress and then there is the question of the roadshow. Also what proposals are we going to put forward – presumably the split season will be added to the three in the report?

“That might be a lot easier now with the webinar experience. I spent a lot of time trying to identify 12 venues where we could have staged the roadshow – exhibition spaces or halls accessible to surrounding areas. It may be with the success of the remote meetings that we will decide to do it that way.”