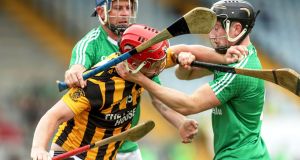 Rising superbly to their task, Shelmaliers, took full advantage of the ‘new normal’ to cap a powerful series of displays in the knockout stages of the Wexford hurling championship by taking the club’s second county title over the water to Castlebridge, Curracloe and Screen.

The separation of the hurling and football seasons ultimately allowed one of the county’s many genuine dual clubs to concentrate on the small ball for the past five weeks and they made it count with another all-action, high scoring performance.

The eerie echo of an empty stadium with occasional partisan shouts from the club officials wasn’t helped as an atmosphere by the winners’ clear superiority but the quality of the championship overall was a huge positive for the county.

Naomh Éanna were a disappointment, maybe the tight finish in their epic semi-final against Oulart taking a toll, but they were hustled out of it by the energy of the new champions, who consistently won the rucks and relentlessly rode out a couple of reversals of fortune.

In fairness to the Gorey club they battled away but never held the whip hand and trailed from gun to tape.

Their attack was smothered and danger man Conor McDonald confined to a single point by Aidan Cash. Shelmaliers’ half backs were again excellent, anchored by the Malone brothers, both of whom are county footballers.

The guile of Brian at centre back and the athleticism of wing back Glen - awarded the MOTM by South East Radio - played a significant role in steadying Shelmaliers in a couple of crises that started when their left-wing back partner Conor Walsh had to leave after a heavy challenge as early as the seventh minute.

There were a couple of pinch points in the match. Having largely dominated the first half, Shels found their lead down to a point in injury-time before the break, which would have represented poor business. Just as in the semi-final though, they broke through for critical scores.

A point by Eoin Doyle, who with Conor Hearne provided another immensely industrious centrefield platform, was followed by replacement Arnie Murphy’s penetrating run into the square where he was taken down. Ross Banville, again calm and considered in attack, stepped up and placed the penalty deftly into the corner of the net.

A lead of 1-10 to 1-5 wasn’t flattering but Naomh Éanna must have cursed the inability to get to the break with their good fortune reflected on the scoreboard.

One of the new imponderables has been calculating what impact the water breaks have on teams. Having a week ago blown away Glynn-Barntown’s promising start to the semi-final in the second quarter, Shels found the situation reversed when after a painstaking opening with wind advantage, they had opened up a four-point lead, 0-6 to 0-2 only to lose the initiative on the restart.

Aidan Cash played a short ball to Jody Donohoe and David O’Brien smartly intercepted to give Cathal Dunbar a run on goal, which he finished with a smartly taken goal. Hopes that the score might revive what has been a difficult season for the county player weren’t however realised and he wouldn’t score again.

A second key swing came three minutes after the break when Aidan Cash made a sensational block on O’Brien. Glen Malone cleared and immediately the other Cash, James was scoring Shelmaliers’ second goal for a formidable 2-11 to 1-5 lead.

“Massive,” said winning manager Vinnie Parker. “that’s what we are drilling into the lads all year. It’s all about work-rate.

“You can have all the tactics that you want and fancy drills but it comes down to work-rate. If you get the hooks and body in, you make your luck. They made their luck on that occasion, great block in, worked the ball down and punished at the other end, a six-point swing, huge in the game. We’ll take it.”

It is to the credit of Naomh Éanna that even with momentum going against them - having also lost their centre back Eoin Molloy to serious injury before the semi-final - they rallied to cut the deficit to three.

Cian Molloy’s crisp shot across Brian Murphy and a couple of frees underwrote the recovery but they promptly gifted their opponents a third goal when a mix-up between Jack Cullen - more subdued this week than last week - and Jack Cushe in goal allowed Seán Keane Carroll to flick the ball into the net.

By now the champions-elect were winning plenty of ball in attack and taking their scores, making it clear to their opponents that they weren’t in the mood for further slippage even though the conceded an injury-time goal by Gary Molloy.

They have a week to get ready for the football championship, which they won two years ago.

The antiseptic nature of the Covid final prompted this reflection from Brian Malone.

“I know from my sake, my parents would love to be here. I’ve a wife and two kids and they go to all the games. I’ve two little boys and they would be in to me after the game. It’s a whole family thing. They love it.

“I know the whole club, everyone’s parents and the wider community, they love going to the games. The fact that we got to a county final and they couldn’t come? It is tough. But it is made easier by the fact that we won.”